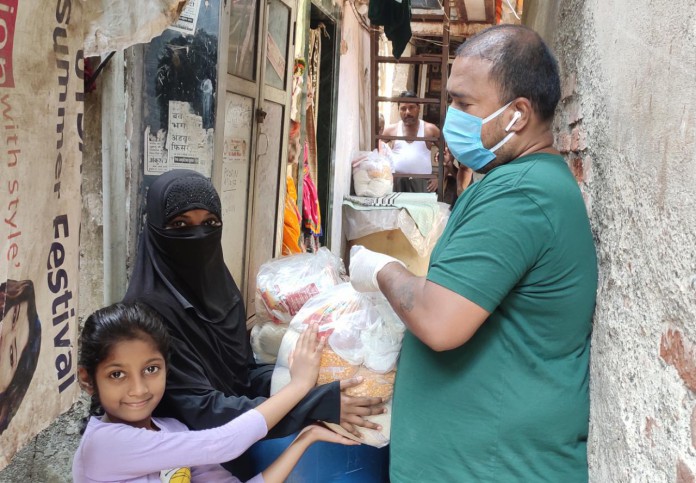 Ever since the Corona lock-down began in India, there has been mayhem due to a lack of proper information, guidelines and rules regarding what is permitted and what is not, specially travelling and going out of your own home. We have all seen the images of thousands of labourers trying to leave the metros specially Delhi and Mumbai, desperate  to reach their homes in far away villages of the country. Though Governments have come out with day to day information, the very fact that it’s too much causes confusion and panic.

Even before the lock-down, Mauris Noronha from I.C Colony, Borivali, in Mumbai, informed the 120+ families in his housing society, that he would be delivering all required food grains, fruits and vegetables within the society’s compound. He advised them to strictly stay at home and not venture out, as most people were already aware of the tragedy due to the Coronoa Virus and its rapid spread in China before. 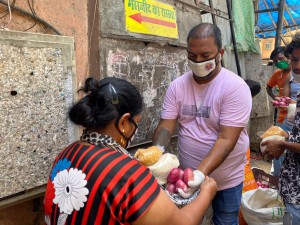 During these trying times, most middle and upper class families have access to essentials like groceries and dairy. Both physical access to the shops or deliveries, and more importantly financial access. Though every income class has been hit, the savings at one’s home, enable the average Indian in metro cities to go through the 30-60 days period, albeit with difficulties. However, for those working as migrant labourers residing temporarily in the hutments and slums with their relatives and yearning to go home, the sudden lock-down has caused a double whammy.

Mauris Noronha and his team go door to door in these chawls and slums of Borivali and Dahisar and give the poor free daily and weekly rations of food grains that they cannot afford themselves. Till the 9th of April he had provided food to over 15,000 poor people and visited over 2000 homes in the slums and backward areas.

Zero income, zero savings, and now they are a burden with the families they are staying at. These are the major category of people who wanted to cross borders, catch trains and rush home, but were stopped and stranded at many places. There is little help for such migrant laborers and even for the poor Marathi manoos in Mumbai. Whose incomes are suddenly a question mark and whose job security is at high risk.

But thanks to the highly praised social work being done by this charitable person, at least the poor dwelling in and around Borivali West, are not going hungry.

The activities conducted by Mauris are, food grain and vegetable supplies to the poor, medicines for infants and elderly citizens, sanitizers and masks to ambulance staff as well as police stations and a regular ration distribution to the house maids and building watchmen of the housing societies in the vicinity. In total the food quantity just this one man has resourced and supplied is over 15,000 kgs.

He has received hundreds of compliments from the citizens, both online and on ground, from the police and essential workers too. When we ask him, how does he manage to procure & provide to so many people, he tells us “God is the provider, we are just his instruments”. But on further prodding, when asked, what really keeps him going, his answer is – The smiles and joyful tears he sees each day when meeting the poor who are lost in these desperate times.

The facebook pages and whatsapp groups of Borivali are filling in with heaps of pictures of Mauris Noronha’s charity work. The local press in Mumbai have covered him, and many such charitable organizations and NGO’s are working together across the city. Here is a link to his youtube video showing charity work in Borivali I C Colony, and some images of Mauris Noronha’s free food distribution.

We spoke to some residents in the area and asked them how they feel about Mauris’s work. A concerned citizen Mr. Gerard said, we are extremely happy and proud to see Mauris and his team work tirelessly each morning till sunset. We are still worried for them as individuals  doing public service, cause any person in the team can easily contract the Covid19 virus, however, the humanitarian crisis overrides all things. It’s good to see the high safety precautions that the team take with social distancing, wearing new masks and gloves each time and disinfecting as much as they can. Mr.Gerard goes on to say that things were worse in Goa where even the common man finds it difficult to get food and he prays that Mauris’s good work will be a shining example to the some other brave-hearts all over the nation and even the world.

We couldn’t agree more, and would like to conclude by saying this.  Even if you cannot feed 1000 a day with the monetary resources that Mauris may have in Mumbai, you can do your bit by checking on and taking care of just 1 poor family for a month. If each one of you readers did that, then you will have taken immediate action that will quench the hunger and thirst of a poor family before the PM’s fund could probably reach them. These are tough times for our nation and let’s be inspired by the few exemplary netizens like Mauris and do our bit.