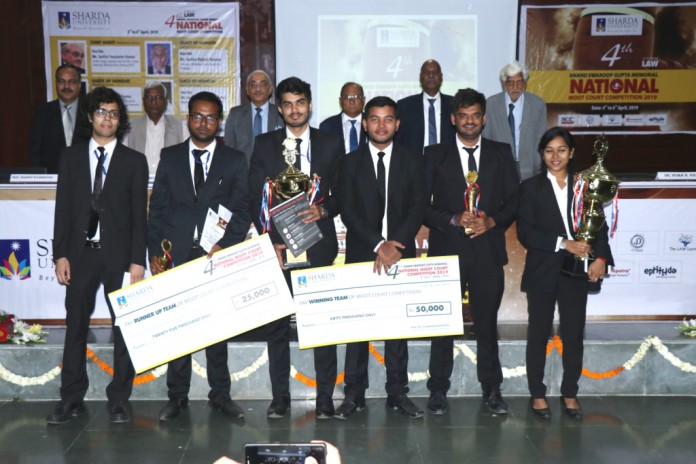 Hon’ble Justice Dipak Misra, Former Chief Justice of India addresses students on need for a holistic approach towards learning and application of law

New Delhi, April 8th, 2019: The 4th edition of the Anand Swaroop Memorial National Moot Court Competition, the flagship annual event for the School of Law, Sharda University was organised from 4th April to 6th April, 2019 at Sharda University campus, where 37 teams from colleges across India participated in the competition. The National Moot Court Competition concluded after three days of impassioned arguments and counter-arguments.

Presenting an effective case backed by research and strong argumentative skills, the students from Damodaram Sanjivayya National Law University (DSNLU) were unanimously adjudged the Best Team (Overall) and the students from Campus Law Centre – Delhi won the runners up position and took home a cash prize of Rs. 50000 & Rs. 25000 respectively. The prizes for best speakers were won by Jeyaram Thitumalai from Campus Law Centre, Delhi and Anjani Harika from DSNLU Vishakhapatnam. The award for best memorial was bagged by Rajiv Gandhi National University of Law (RGNUL), Patiala.

Former Chief Justice Shri Dipak Misra addressed the audience, “Law is a noble profession because we provide selfless service to the society. I would like to encourage the students participating in the Moot competition to selflessly serve the people of the country. Mooting delivers a holistic approach to learning the law, as the students argue imaginary cases for practice, focused solely on the application of Law to a common set of evidentiary assumptions.”

Justice Swatanter Kumar, Former NGT Chairman on the occasion said, “I would like to thank Sharda University for inviting me to the 4th edition of the Moot Court competition and promote experiential learning among students. This event has witnessed exponential growth as more and more teams participate in the competition each year. It is indeed a great platform to promote comprehensive examination of the factual matrix, and the application of the appropriate law to the facts. Lawyers are very important to the social fabric of the country, and students willing to choose the profession as a career should not follow just their head, but their conscience as well.”

Moot Court competition is aimed at developing advocacy skills in students in order to make them confident lawyers of the future by replicating the real-world environment of court rooms. The three day event consists of teams advocating both sides of a simulated issue with an aim to develop advocacy and research skills and help sharpen legal acumen, logical argumentation and critical thinking abilities among law students giving them a chance to get hands-on experience in the operation of legal doctrines in a practical setting. 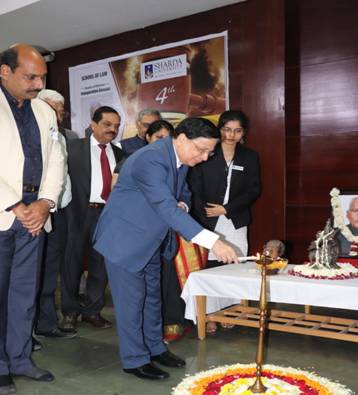 The Sharda Group of Institutions (SGI) has been the provider of world class education since 1996. Sharda University is a leading educational institution based out of a 63 acre sprawling campus in Greater Noida, Delhi NCR. A venture of the renowned Sharda Group of Institutions (SGI), the University has established itself as a high-quality education provider with prime focus on holistic learning and imbibing competitive abilities in students. Sharda University has more than 180 tie-ups with global universities such as, Middlesex University, London, King’s Western University, Canada, Missouri State University, Sacred Heart University, Ural Federal University, and University of Ljubljana which are beneficial for both students and the faculty. It is the largest educational group based in Uttar Pradesh, having 20,000+ students from 80+ countries and 1200+ faculty strength. More than 350 corporate have visited the university this year with 37,500+ students placed so far in various multinational companies. It also has 47,500+ alumni network who are today leaders in their respective realms.