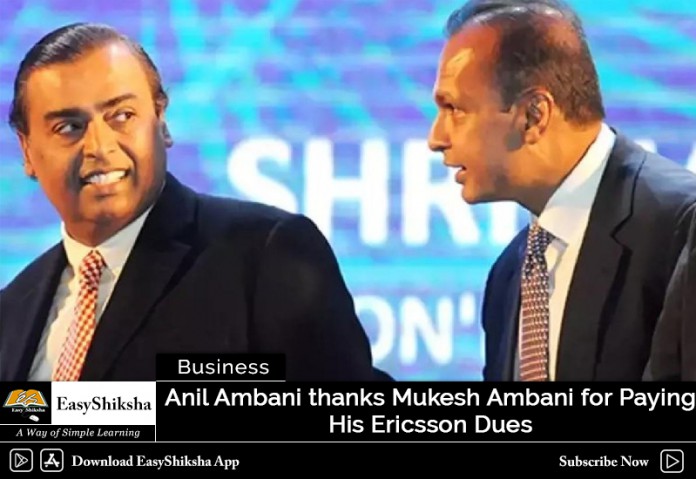 Anil Ambani was about to go to jail for not able to pay his Ericsson dues of about Rs580 Crore. Mukesh Ambani saved his younger brother Anil from imprisonment by paying money owed by him to Ericsson on Monday.

In a statement, Anil Ambani thanked his brother and sister-in-law Nita.

“My sincere and heartfelt thanks to my respected elder brother, Mukesh, and Nita, for standing by me during these trying times, and demonstrating the importance of staying true to our strong family values by extending this timely support,” Anil Ambani said in the statement.

“I and my family are grateful we have moved beyond the past, and are deeply touched with this gesture,” he added.

RCom had requested for the withdrawal of Rs 260-crore tax refunds, lying in a trust and retention account, to pay the Swedish telecom equipment manufacturer, but the plan was opposed by its lenders, including State Bank of India (SBI). Following this, values by extending this timely support,” Anil Ambani said in the statement. RCom had approached the National Company Law Appellate Tribunal (NCLAT) with a plea that since the apex court order had asked RCom, and not Ambani personally, to pay Rs 453 crore, the money lying in the two accounts was all it had to make payment to Ericsson. RCom’s plea was, however, rejected by the NCLAT on March 15.

The company’s failure to repay lenders and service prov­iders coupled with Ambani’s personal repayment guarantee made him liable of contempt of court in case of non-payment.