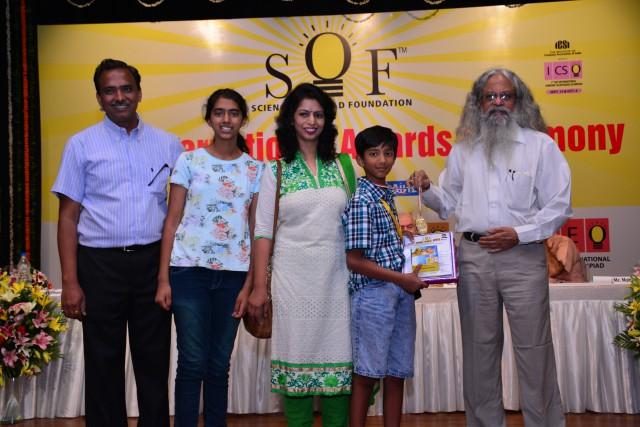 Arnav Garg, a class 4 student from Suncity School tops the International Mathematics Olympiad. The competitive examination conducted by Science Olympiad Foundation in association with the British Council, held in the capital saw a participation of more than 45 lac students from around 22 countries.

Olympiads recognize and nurture future scientists, technologists, IT and other professional talents at school, state or International level. They instill a feeling of belonging to national and global students’ fraternity.

Congratulating the topper, Ms. Rupa Chakravarty, Principal, Suncity School said, “I am very happy that Arnav has procured the first rank in the International Mathematics Olympiad. He has always been a sincere and hard working student. Heartiest congratulations to the child and his family.

Arnav, who was felicitated with a gold medal post the result declaration, feels that mathematics is as easy as playing a game. “I love challenges in mathematical problems. For me, mathematics is not a subject, but a game. I think it is only my interest in mathematics and regular practice of mathematics equations,” said the proud student of Suncity School, Gurgaon.

SOF is world’s largest non-profit organizer of Olympiad exams and has been conducting Olympiads for almost 2 decades now. It spends more than Rs.10 crores every year, on felicitating the winners with awards and scholarships.

“He has been quite persistent. He has this habit of completing everything he takes up. I think he finds mathematics quite challenging and doesn’t leave a problem unless it is solved. We are glad that he secured the first rank. We want him to pursue his interest in mathematics”, said Ritu Garg, Arnav’s mother.

The first and second positions in International English Olympiad were also secured by students from Gurgaon, namely, Ashmit Sangwan, a class 5 student from The Maurya School and Rangoli Gupta of class 11 from The Shri Ram School, Aravalli, respectively.

“The Olympiads attempt to develop a spirit of competitiveness among students and to prepare them to face competition beyond their school level. Each participating student’s performance is analyzed and a school, city, state and international rank awarded, to enable the student to know her/his level of preparedness and readiness to face competition,” said Mahabir Singh, the founder & Executive Director of SOF.

Around 79,000 students from more than 5,000 schools have been felicitated for securing top state level ranks in different Olympiads under SOF’s flagship and approximately 6,00,000 students have been honored with medals for achieving top ranks in their respective schools.