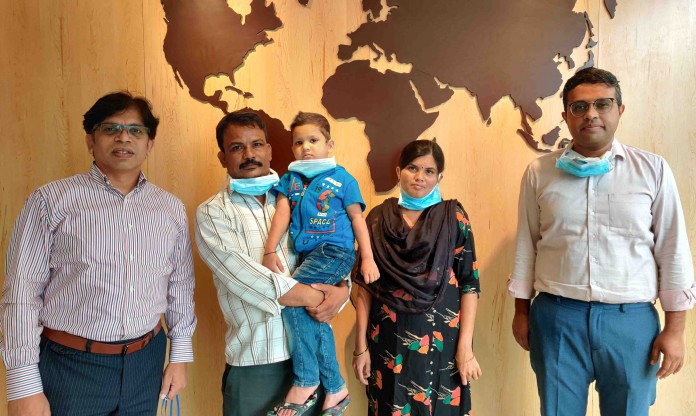 Bangalore, 21 July 2020: In a life-saving surgery, 6-year-old Sarvesh, a child from RR Nagar received a live liver transplant from his mother recently. He was suffering from a very rare kind of tumour called hepatoblastoma, which had grown to a large size and had almost occupied his liver. Hepatoblastoma are rare malignant tumours which mostly occur in children less than 5 years of age. The boy was only 5 years and 6 months old when the tumour was detected.

Sarvesh initially had symptoms of stomach pain in Dec 2019 and his mother noticed that he had developed a swollen abdomen. Investigations revealed a growth within the liver. This tumour is very sensitive to chemotherapy and the child had already undergone 6 cycles of chemotherapy at another specialist hospital. Following this they were referred to the Integrated Liver Care Group at Aster RV Hospital.

Dr. Rajiv Lochan, Sr. Consultant – HPB and Liver Transplantation Surgery, Aster RV Hospital said, “Chemotherapy shrinks the tumour and, some children can undergo a liver operation to remove the tumour and leave enough liver behind to support the child.  However, in some patients the tumour is so large that a safe operation to remove a part of the tumour bearing liver is not possible, even after chemotherapy. This was the situation for Sarvesh. In such cases, a paediatric liver transplant (operation to remove the whole liver and replace it with a part donated from another individual, usually a parent) is done.  This is a living donor hemi-liver transplant. Hepatoblastoma is a unique paediatric solid tumour which has an extremely favourable response to liver transplantation. Following successful treatment, these children can lead normal lives as the chance of recurrence of these tumours is extremely small.”

Sarvesh and his mother underwent a full and extensive transplant assessment. The whole operation for both the mother and child took 16 hours to complete, where a portion of the donor’s left side of liver was removed. Sarvesh’s liver which was replaced by a large tumour was removed completely and a portion of his mother’s liver was meticulously joined to the various blood vessels and a new bile duct.

All national protocols related to the prevention of spread of the COVID was followed during the conduct of this surgery. The operation was conducted without need for blood transfusion and the child was transferred to the Transplant ICU. He spent 14 days in hospital and was discharged. Both mother and child have recovered completely. The child is free of tumour. This successful transplant has led to a very high possibility of a complete cure from the cancer resulting in a new lease of life to the child.

Dr Chetan Ginigeri, Consultant, Pediatric Intensive Care, Aster RV Hospital explained the importance of post-operative care, “Taking care of children with Liver disease is a complex exercise. As the liver coordinates the entire energy supply, waste management of body cells and stops the bleeding from injury and enables healing; any disease-causing suboptimal function will have cascading effect on every aspect of child’s growth. Poor feeding, poor digestion, irritability, sleep disturbances and overall growth failure to name a few. Sarvesh responded well to his operation and needed artificial ventilation only for a day”.