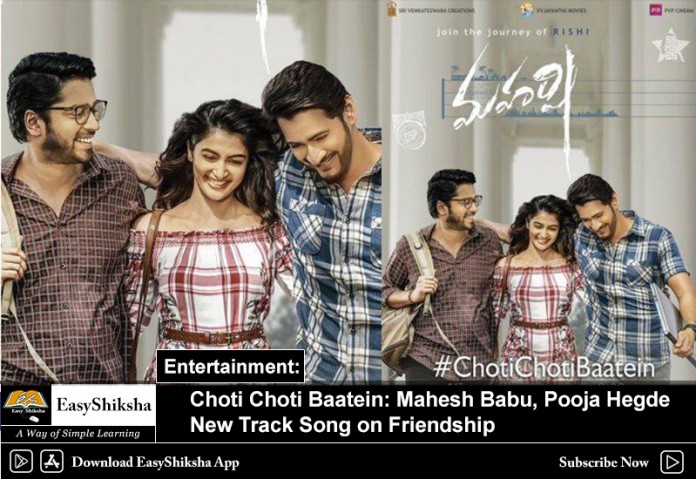 A couple of days back, makers of Maharshi released a couple of song posters teasing the first track from the film titled Choti Choti Baatein. No points in guessing it made all the Mahesh Babu fans extremely excited and hyped about the movie as well as the song. And the song finally is out today and we must say Devi Sri Prasad, the legendary music composer has done it once again.

From the looks of it, it seemed that the song will be a soft ballad about the three friends. The music of the film is composed by Devi Sri Prasad. The first song of Maharshi is out now and we have to say, it is a track that you must not miss. Starring superstar Mahesh Babu, as per reports coming in the movie is something on the lines of 3 idiots.

While sharing the post on social media, Mahesh wrote, “The Musical Journey of #Maharshi begins on 29th March at 9:09 a.m.. Get ready to celebrate Friendship with me @hegdepooja & @allari_naresh with #ChotiChotiBaatein… A @thisisdsp Musical. #MAHARSHI1stSINGLEonMARCH29th.”

The Musical Journey of #Maharshi begins on 29th March at 9:09 a.m.. Get ready to celebrate Friendship with me, @hegdepooja & @allari_naresh with #ChotiChotiBaatein… A @thisisdsp Musical. #MAHARSHI1stSINGLEonMARCH29th

Harish Shankar, who is a close friend of director Vamshi Paidipally, has apparently listened to Choti Choti Baatein from Maharshi. He claimed that the first song is going to be a chartbuster track. He tweeted, “Trust me guys one of the best compositions of @ThisIsDSP and I can say a chart buster is on the way.”

Aditya Music, which has bagged the audio rights of Maharshi, released the first song from the film on its official YouTube channel. Mahesh Babu took his Twitter page to share the link to the lyrical video with his followers, while Vamshi Paidipally dedicated the track to all friends. The director tweeted, “#ChotiChotiBaatein… Dedicated to all the Friends and their Friendship Stories… :)”