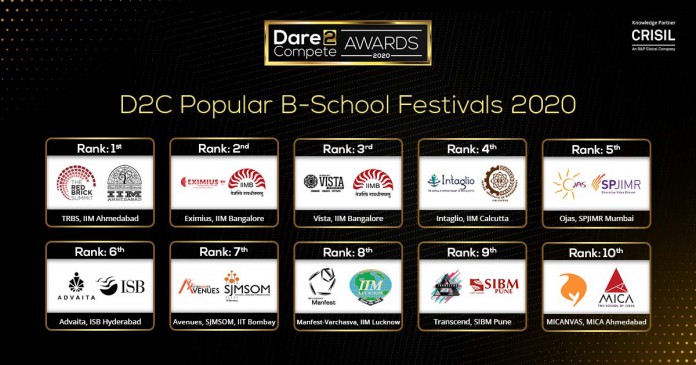 This year Dare2Compete has revealed the rankings for D2C Popular B-School Festivals 2020 based on around 14,000 student votes. B-School festivals are purely a student-driven enterprise and often require students to don multiple hats to ensure its success. B-Schools festivals across the country were opened for online voting. Basis the votes garnered, top 10 D2C Popular B-School Festivals 2020 were decided.

IIM Ahmedabad manages to be a regular feature in headlines and has made it to the spotlight yet again, with its annual management festival The Red Brick Summit 2019 taking home the title of D2C Most Popular B-School Festival 2020. The 4-day long festival saw over 60,000 registrations and a whole range of events and competitions.

Coming in at a close second and third were Eximius and Vista respectively, both organized by IIM Bangalore. Eximius is the annual Entrepreneurship Summit which saw almost 15,000 budding and successful entrepreneurs, venture capital firms, academia, corporates and aspiring undergraduate and postgraduate students flock to the lush campus. Vista 2019 organized by IIM Bangalore, an International Business Summit, is held every year during the summer months. The theme for Vista this year was Command Conquer Captivate.

The fourth and fifth spots were occupied by Intaglio organized by IIM Calcutta and Ojas organized by SPJIMR Mumbai respectively. With over 12,000 and 17,000 registrations respectively, these festivals caused quite the stir.

B-Schoolers of today know how to hit the books and also how to hit it hard when it comes to engaging the mind at every level. Their ability to leave no stone unturned when it comes to seizing a learning opportunity is one of the many reasons why these are the most sought after minds of the nation.

For more information on Dare2Compete Awards 2020, visit their website.