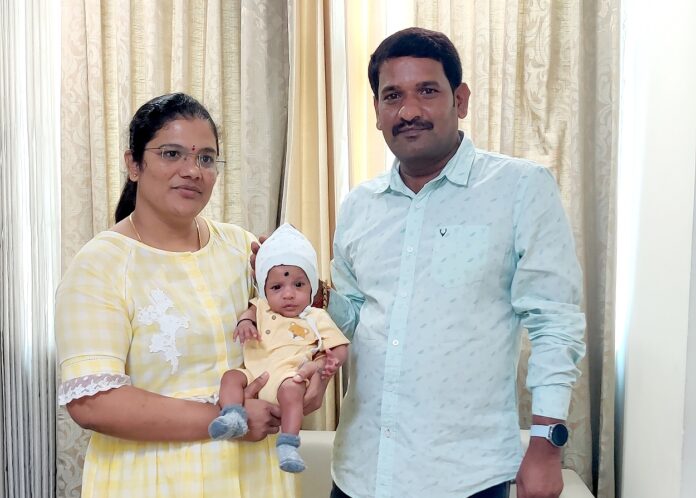 Bangalore 23rd Feb 2022:  When Mrs. Rekha Ramesh, found out she was pregnant, she started taking every precaution she could to keep herself and her baby safe. This was not just a normal, regular situation – Mrs. Ramesh had been fighting with herself for a mammoth over a decade to become a mother – such was her intense desire. And not just this – she went through multiple miscarriages and nearly 10 attempts of IVF treatment, before finally succeeding in pregnancy. Her joy knew no bounds when she found out she was pregnant. However, during the second wave of Covid she caught the virus and suffered badly. Soon, her health deteriorated due to the infection and she had to be hospitalized as her pregnancy was at risk. She was referred to Aster CMI Hospital. Upon arrival, she was taken to the ICU for further observation and investigation. In 24 weeks of pregnancy, Mrs Ramesh underwent an emergency caesarean section because of the complications.

Explaining the challenges involved in the surgery, Dr. Chetana V, Sr. Consultant – Obstetrics & Gynecology. Aster CMI Hospital said, “In a pregnant mother, the mother’s life is of paramount importance. When Mrs. Rekha Ramesh arrived at the hospital, we shifted her to the ICU as her health worsen due to the Covid infection. After extensive counselling with the anaesthetist and neonatologist, we decided to go ahead with an emergency Caesarean section. Her lungs were damaged due to the infection so we had to put her on ventilator. We immediately performed Caesarean Delivery. This had to be performed faster as we could not expose her to anaesthesia for long, she could not be operated on a flat surface and c-section was performed in the reclined sitting posture. And then, slowly, with all the treatment and the backup of the COVID ICU team, we successfully performed the surgery and she was kept in the ICU for further observations. She gave birth to an extremely preterm baby weighing about 500 gm.”

Commenting on the condition of the baby, Dr. Sudheer K A, Consultant – Neonatology & Pediatrics, Aster CMI Hospital said, “Babies born before 37 weeks of pregnancy are called “preterm” or “premature. While babies born before 28 weeks of pregnancy are considered extremely preterm. In this case, the delivery was done during 24 weeks of pregnancy when the mother was still infected with Coronavirus. However, with the help of highly skilled doctors backed by the state-of-the-art medical equipment at Aster CMI, the delivery went successful. We were able to manage the baby with proper covid protocols and early intervention. The baby was intubated and shifted to the neonatal intensive care unit (NICU) and was put on high-end ventilator support. The journey was a challenge as the baby faced many complications like severe respiratory distress syndrome requiring prolonged ventilator support followed by NIV, symptomatic Patent Ductus Arteriosus, feeding intolerance (Early Necrotizing Enterocolitis) requiring total parental nutrition. The baby also had post covid complications (MIS-N) and his both eyes were affected with Retinopathy of prematurity for which laser treatment was performed in NICU.  With the efforts of the excellent nursing team and supervision of experienced Neonatologists, the baby responded well to the treatment and care. After 100 days of continuous monitoring in NICU, the baby’s condition improved and with the mother feeding the baby put on adequate weight and was discharged in stable condition”

Dr. Prakash Doraiswamy, Sr. Consultant -Anaesthesia & Critical Care, Aster CMI Hospital said, “Pregnant mothers who have severe Covid are treated with utmost care. Mrs. Rekha Ramesh’s case was critical, we had to balance the safety of the mother with the viability of the babies. Our main goal was to keep the mother safe at all times. When her respiratory rate increased then we had to put her on a ventilator. The delivery of the babies was timed at this time as well. She remained in ICU for a few weeks after her delivery and then improved gradually with the help of our experienced ICU staff”

Thanking the doctors, Mrs. Rekha Ramesh said, “I have been wanting to become a mother for a decade. Finally, when I was about to become a mother I was infected with Covid during the second wave. I was totally devastated, and the infection affected my pregnancy which lead to giving birth to an extremely premature baby. After a month’s stay in ICU, I have slowly regained my health. My baby’s weight was 500 grams when she was born and after 3.5 months she was about 1 kg. I am extremely grateful to doctors, nurses, and other staff at Aster CMI who made my complicated pregnancy a successful one”

After birth, Mrs. Rekha Ramesh was given anti-infection, oxytocin, and fluid rehydration therapy. After a three-month follow-up, both mother and infant are in good health.

ALSO READ: A New Feather in the Cap of Dr. Suryyani Deb, Faculty of MAKAUT, WB,