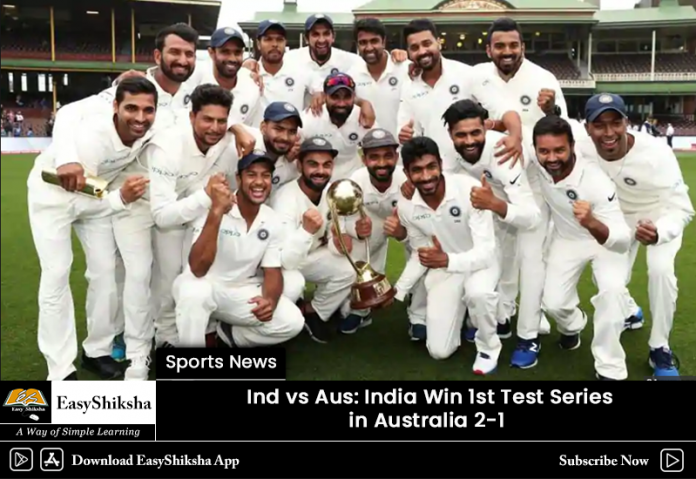 Indian cricket got its fresh seminal minute after talismanic Virat Kohli headed the country to a maiden series victory on Australian soil, finishing a 71-year wait to script a golden chapter in the game’s history. India won their first-ever Test series in Australia as the fourth Test at the Sydney Cricket Ground concluded in a draw on Monday. Having won the Tests at Adelaide and Melbourne, the amount one-ranked Indian Test team clinched the four-Test series 2-1.

The fifth day of the final Test was washed out without a ball being bowled due to continuous rain since morning in Sydney. The morning session was washed out on Sunday as well, after that we watched a bit of drama in the next semester and the temptations of the final session. Resuming in the overnight total of 236 for six, Australia crumbled to 300 out on the fourth day. Australia was made to follow-on in the home for the first time in 30 years.

Last time they had to follow-on Down Under in a Test match against England in 1988. Usman Khawaja (4*) and Marcus Harris (2*) were unbeaten as Australia posted six with no reduction before the umpires called off the day because of bad weather condition. They were still 316 runs behind India’s first innings total with ten wickets in hand.

Kuldeep Yadav maintained a five-wicket haul, his second from the Tests, as India wrapped up the hosts following Marcus Harris’ remarkable 79 and a few defiances from tailenders Mitchell Starc (29), Jose Hazlewood (21) and Pat Cummins (25). Apart from a five-wicket haul by the youthful left-arm spinner, Mohammed Shami and Ravindra Jadeja took two wickets each for India. Joint-highest top wicket-taker Jasprit Bumrah (21 wickets) disregarded Peter Handscomb for 37 to join the celebration.