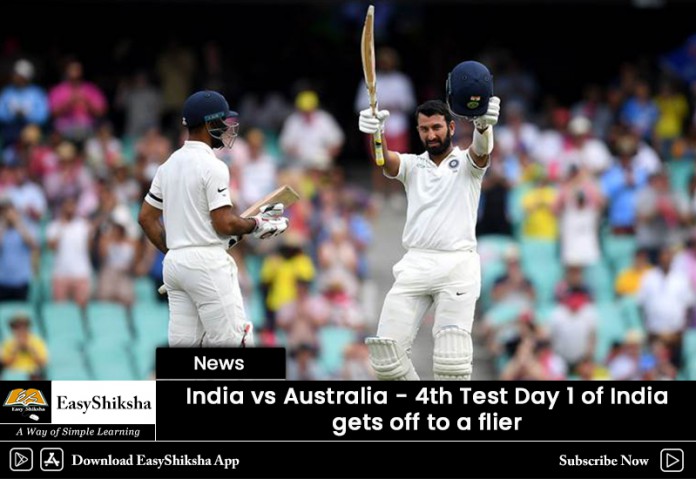 Cheteshwar Pujara has well and truly gone on overdrive in Australia. From the end of this first day’s play at the Sydney Cricket Ground, he was unbeaten on 130 runs off 250 balls. That bloated his series tally into 1135 balls faced and 458 runs scored, which will be his career-best performance in a string, home or away. India stopped Day two on 303/4.

India won the toss and chosen to bat first. Kohli reckoned that the pitch could get increasingly difficult to bat as the match wore on and therefore batting is something India had determined to perform a great deal sooner if they won the toss. The Indian captain stated that Mayank Agarwal will be combined by KL Rahul in the top of the purchase and Kuldeep Yadav will probably be Ravindra Jadeja’s spin partner.

Agarwal attained his second fifty of the series and then began taking on Nathan Lyon. He struck equal sixes over Lyon’s head to deliver a buzz around the SCG however, the spinner ended up with the last laugh. Agarwal had made 77 when he had been dismissed. The partnership between him and Pujara has valued 116 runs, the majority of which was created due to the overdue belligerence of Agarwal.

However, as was the situation in the very first semester, Australia didn’t find any more wickets. Virat Kohli came in and seemed to be picking up from where he left in the first innings at MCG. The group frustrated the Australians for the first part of the third session however Kohli shortly fell to Hazlewood.

Australia had their tails up by that point but Hanuma Vihari came in and beat it down.

It was through this rack that Pujara attained his 18th Test century. From the end of the afternoon, the partnership between Vihari and Pujara had swollen 75 and the wicket of Rahane remained the final person to fall on Day 1.