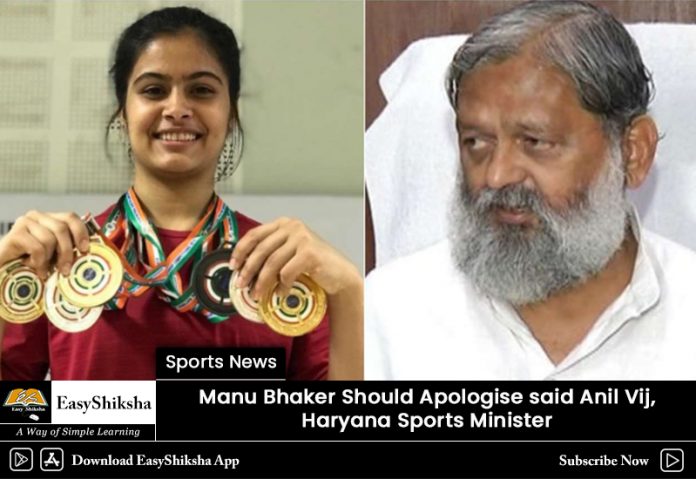 Haryana Sports Minister is asking Manu Bhaker for the apology for all the controversy she created in recent time on price money that was not given to her and also want her to focus on her sport. All this controversy started when Manu Bhaker tried to remind Haryana Govt. about the winning price promised at the time she won the gold medal at Youth Olympic Games. The amount she was promised to be awarded with is 2 crore.

There should be some sense of decipline in players. Bhaker should feel sorry for creating this controversy. She has a long way to go. She should focus on her game only.

On the defensive, Anil Avij tweeted that Bhaker should have come to the sports department before going public. “Manu Bhaker should have first confirmed it from the Sports Deptt. before going to public domain. It is disgusting to denounce a State Govt which is giving highest awards in the Country. Bhaker will will will get 2 crores as tweated by me and as per notification at that time (sic),” he said.

As per the state government’s changed policy, which came into effect before the Youth Olympics, Rs 2 crore was marked for the gold medallists, Rs 1.25 crore for silver medallists and Rs 80 lakh for the bronze winners. Before that, the YOG medallists would get Rs 10 lakh, Rs 7.5 lakh and Rs 5 lakh in descending order.

However, the government again revised its policy last December and brought the amount down to Rs 1 crore for gold, Rs 65 lakh for silver and Rs 40 lakh for the bronze medallists.

Bhaker’s father Ram Kishan Bhaker, who is a chief engineer in the Merchant Navy, said moves such as this can break the morale of athletes.

You just forced a reminding tweet into controversy while you do not fulfill your own commitment or promises and there is nothing has been undisciplined by @realmanubhaker . She just gave a reminder of what she deserved and won. #iamwithManuBhaker #ManuBhaker

If she didn’t creat this controversy , no one will come forward for her help. She has made a long level of patience after that she might be have taken this decision to go publicly. — Balvinder Kumar RRG (@Bkumar584) January 5, 2019

But dear minister, you have to fulfill the promise within a time frame. You only tell us in how many days such promises are to be fulfilled. Look towards @Ra_THORe ji, he is also doing good work. You have to be supportive in the state. Please don’t spoil reputation of BJP. — Dharamvir Singh (@DharamvirSD) January 5, 2019