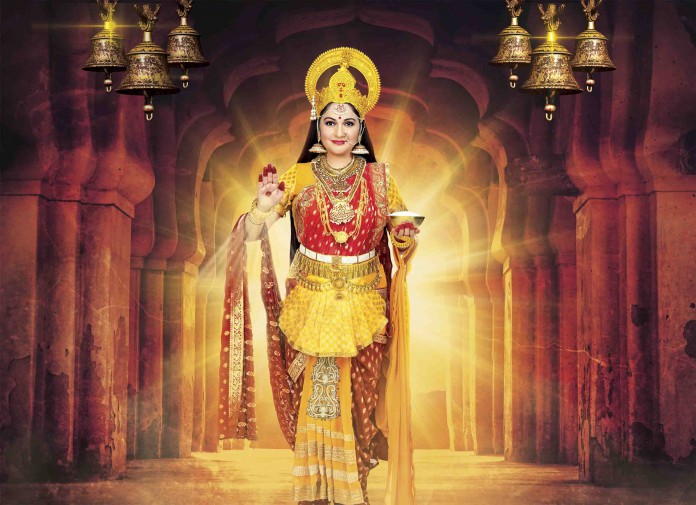 &TV’s Santoshi Maa Sunaye Vrat Kathayein captures the pure connection between a ‘Bhakt and Bhagwan’. In the current scheme of situations, Indresh (Ashish Kadian) and Swati (Tanvi Dogra) are to formally wed each other with proper Rasm and Riwaaz. While Indresh has kept this fact hidden that Swati is indeed not pregnant, Kunti (Purva Parag), Indresh’s mother is already looking forward to a grandchild. The rest of Indresh’s family is not willing to accept Swati as their Bahu and asks her to leave the house. Meanwhile, in Devlok, Poulomi (Sara Khan) blames Santoshi Maa (Gracy Singh) for the kidnapping of Lord Indra. She requests Mahadev and Lord Vishnu to punish Maa by taking away all her powers. How will Santoshi Maa now be able to help her ardent devotee Swati and her husband Indresh, to come together again?

As the story moves forward, Indresh and Swati leave for Swati’s place. Kunti too willingly wants to leave them. As they reach Swati’s house, Indresh seeks blessings from Swati’s parents who are delighted to see them together. Kunti gives her Kangan to Swati asks Indresh to call the Panditji for fixing up the final dates. The Panditji then arrives and discloses that a re-marriage is impossible as Indresh’s life is in danger. Swati asks for a solution, to which Panditji says they will have to live separately from each other for more than a month and perform a MahamrityumjayMahamantra chanting. While in Devlok, Santoshi Maa bears the brunt of Lord Vishnu’s wrath due to Poulomi’s accusation of the kidnapping of Indra. All her powers are taken away from her, and she is sent away to Prithvilok in search for Indra.

Talking about the plot, Gracy Singh, who plays Santoshi Maa, says, “This was one of the most intense scenes for me as Santoshi Maa’s powers were taken away and it became exceedingly difficult for her to help her devoted Bhakt Swati in one of her toughest times. And how this will impact Swati? Will Maa will be able to guide her to bring things back to normal? That is my view will be the true testament of a “Bhakt and Bhagwan” relationship.”

Swati prepares to have the bad omen lifted from Indresh as suggested by Panditji and leaves the house to stay away from Indresh. In the process of bringing Swati back, Indresh meets with a horrible accident! Will Swati along with Santoshi Maa be able to save Indresh’s life? Will Indresh’s family now blame everything on Swati?