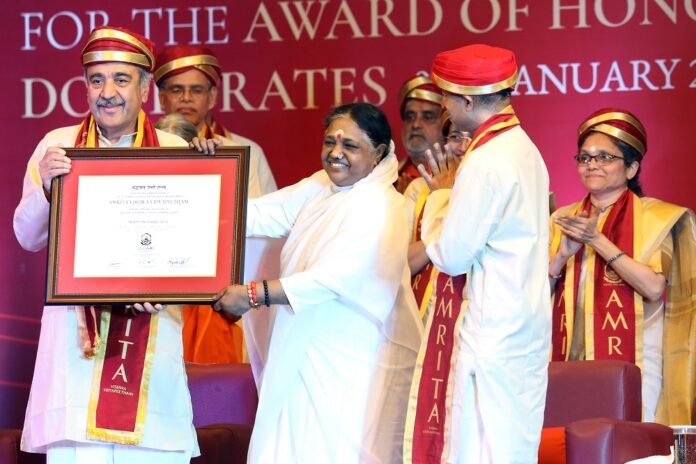 Mr. Sanford is among the world’s richest people, known for his wish to “die broke” by providing for people in need. His total giving to date is more than $1.6 billion, with which he has established charitable initiatives for medical innovation, improved health care, and pediatric medicine. This includes Sanford Health, a group of 47 non-profit hospitals that is the largest rural health system in the United States. He is also the founder of the Sanford Project, which funds efforts in finding a cure for Type 1 Diabetes and is the benefactor of UCSD’s Institute for Empathy and Compassion.

Born in Mumbai, Prof. Pradeep K. Khosla is a distinguished academic leader and electrical and computer engineer who became UCSD’s eighth Chancellor in 2012. UCSD is an academic and research powerhouse that is recognized as one of the top 15 research universities in the world. Prof. Khosla is heading initiatives fueled by technology to foster collaboration and solve societal challenges. He initiated UCSD’s first-ever Strategic Plan and raised $3.05 billion, exceeding its original goal by more than $1 billion. With these efforts, he has significantly expanded college access and affordability for underserved populations, initiated interdisciplinary research, and strengthened university and community relationships and partnerships.

Accepting the honor, Mr. Sanford said: “I am deeply moved by the work you are doing here and being a part of that with our Compassion program where we will be joining hands and hearts and minds. Not only the program that I created for very young children starting from pre-school on up to middle school—which now reaches 22 million kids in the United States—but also to work closely with Amma’s institutions here in India, the USA, and globally. There is a lot of alignment and synergy between my programs and objectives and Amma’s work.”

He added: “The Sanford Centre for Harmony will work with Amma’s programs such as Live-in-Labs to complement, extend and enhance each other. Under Amma’s guidance, we will also establish a Centre of Empathy and Compassion here at Amrita that will collaborate with the University of California, San Diego to reach greater heights and achieve common goals. I am immensely pleased to have the opportunity to meet Amma and receive this honorary doctorate bestowed upon me by Amma.”

While accepting the honorary doctorate, Prof. Khosla said: “Amrita has much in common with UC San Diego. We are both multi-disciplinary, research-focused, and top-ranked. We both have a demonstrated history of preparing promising minds to be leaders in whatever path they choose to pursue. We both nurture a diverse, inclusive, collaborative environment on- and off-campus.

We both have a tradition of inspiring students to enhance the human condition to benefit all of society. We both share collective focus on transforming a global society through access to education and interdisciplinary research to address pressing issues of societal concern with a focus on social and economic mobility.”

He added: “We share a mutual dedication to learning more about empathy and compassion in leadership and to putting those lessons into practice. The Sanford Institute for Empathy and Compassion helps medical professionals integrate empathy and compassion into the core of patient treatment. And the institute also focuses on understanding and supporting the mental well-being of medical providers, which is so fundamental to quality care. Empathy is about recognizing and caring about how another person feels. And we each have to make that connection with others to succeed as leaders and to collaborate effectively.”

Addressing the audience, Amma congratulated both the recipients of the honorary doctorates and said: “The peak of research is compassion, and once you have reached that, everything else is revealed. Research is happening in so many areas, but once you become compassionate, that is the crown jewel of life for the entire world. It makes all our actions sweet and fragrant. And then having the intention to research compassion itself is significant. We should have deep appreciation to Mr. Sanford that he undertook that, as it is the action of a great mind.”

She added: “If compassion is there, in any area of research, once that feeling awakens within humanity, then all wars will disappear. If we see the world through the eyes of knowledge and perform service with the hands of compassion, we will be able to bring peace and prosperity to all the world. There is no source of contentment as great as selfless service. All negativities burn to ashes.”