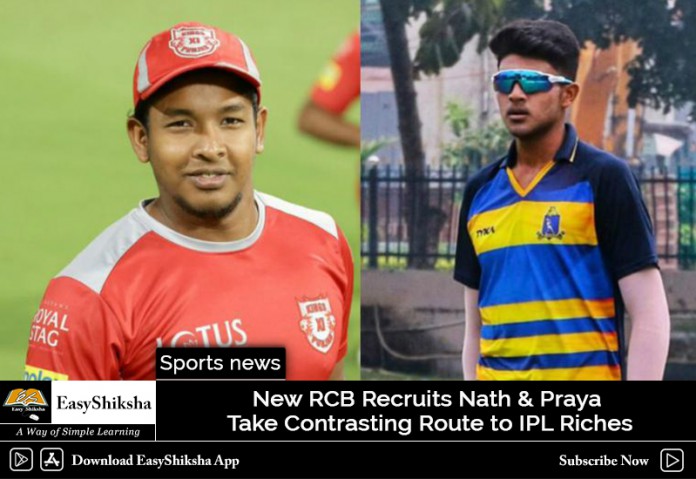 Imagine being all 16 years old and becoming a millionaire overnight. On December 18, that is exactly what occurred to Prayas Ray Burman, a little-known leg-spinner, that had been picked up by Royal Challengers Bangalore to get a whopping Rs. 1.5 Cr, a 650% markup from his bottom price of Rs. 20 lakhs RCB Recruits.

For Prayas, the bidding war to get his services was a complete shock, as he returned at home in Kolkata to see the event unfold. Was he expecting such a price? The answer: No!

“I never expected that I’d be even picked up, depart alone going for that amount,” said an excited Prayas to Cricketnext, “I was watching the auctions, awaiting my turn but never anticipated anything. However, when it did it was such a fantastic feeling. I was amazed, for certain.”

Prayas initially came to limelight when he picked up 11 wickets for Bengal at the Vijay Hazare Trophy earlier this season, in nine matches. He returned impressive figures of 4/20 on debut against Jammu & Kashmir and carried on producing eye-catching performances throughout the tournament. Having an economy rate of just 4.45 from the nine games, he was called up into the Bengal Ranji Trophy squad in only 15, though he’s yet to make his first-class debut. Standing tall at 6’1, Prayas includes a classical leg-spinner’s action and relies mainly on his inventory delivery to deceive batsmen, though he insists he has each of the variations in his armory. He’s more in the mold of former priest and India’s highest wicket-taker in Tests and ODIs, Anil Kumble.

“I prefer bowling my stock ball, that is your leg-spin, the majority of the times. I do have variants, but I do not count on these variations, I like to focus more in my leg-spin,” says Prayas.

However, it hasn’t been an easy road for this particular 16-year-old lad. Prayas’ formative years as a cricketer began at an academy in Delhi but his professional career just begun to take shape when he transferred to Durgapur, in Bengal, where he joined Durgapur Cricket Centre under the watchful eyes of his own trainer Shibnath Ray. He afterward shifted base to Kolkata after he caught the attention of selectors in a local tournament and has been selected for Bengal U-14 and U-16 sides and now stays with his grandparents. “I played with a championship here in Kolkata and it went well and post I was chosen from the U-14 teams.

“I want to play for the country, that’s the fantasy, that is why I try and that’s what I wish to achieve.” While Prayas, at just 16, has found recognition at just the first stage in his career, joining him in the Bangalore camp is going to be a guy who’s had to bide his time – Akshdeep Nath. The 25-year older from Uttar Pradesh was a consistent performer on the domestic circuit but hadn’t had much by way of fame.