France at the top with the most generous tax incentives, Mexico at the bottom; India somewhere in the middle, only country to incentivise donations to Govt entities

New Delhi, 24th December 2021: The Centre for Social Impact and Philanthropy (CSIP), Ashoka University, and Centre for Budget and Governance Accountability (CBGA) have conducted a study on the relationship between tax incentives and philanthropic giving. The study compares India’s incentive policy with that of 11 countries, namely Bangladesh, Brazil, China, France, Mexico, Norway, Singapore, South Africa, South Korea, UK and US, selected for the diversity of their economic status and models.

India falls somewhere in the middle because the rate of incentives offered has declined due to tax policy changes of 2017 and the introduction of a ‘dual tax structure’ in 2020. Lower personal income tax rates and the abolition of inheritance and wealth taxes have further reduced the attractiveness of tax incentives for philanthropy.

Governments across the world support the nonprofit sector through various measures. One of the most common and visible of these are tax incentives on charitable donations made by individuals and corporates. Of the countries studied, France, Singapore, and the UK have the most generous tax incentive structures, while Bangladesh, Brazil and Mexico fall at the other end of the spectrum. France, rates highly because its incentives take the form of tax credit,  whereas for Singapore, it is the high rates of both, incentive and ceiling, and in the case of the UK, it is the combination of tax rate, form and the rate of incentive. Bangladesh’s low rate of incentive and Brazil’s and Mexico’s, low deduction ceilings determine their lower ratings.

The study finds that taking other factors such as the culture of giving, level of economic development, and individual personality into account, incentives do impact the ‘cost of giving’. Some of the broad findings are:

Speaking about the study, Subrat Das, Executive Director, Centre for Budget and Governance Accountability (CBGA) said, “Given the persistent challenges of inequality and the uneven post-pandemic recovery, India needs a quantum increase in domestic philanthropic funding directed towards upliftment of the most marginalised; the latter will depend on the extent to which our tax system and regulatory framework are made more enabling for civil society interventions.”

Considering the enormous role that the non-profit sector plays in India and the impact of Government policies in promoting the concept of ‘Giving’, the study gives the following recommendations:

Speaking about the study and importance of data availability, Ingrid Srinath, Director CSIP said, “The data across development goals are clear. India has enormous gaps in our achievement of the Sustainable Development Goals (SDGs) that have been further exacerbated by COVID-19. A serious re-examination of our tax incentive regime could not be more urgently required. Even just making data more accessible could unleash a flood of generosity from Indians across the country.”

Besides identifying the kinds of tax incentives provided for charitable donations by these 11 countries, the study also assesses what evidence exists for the effectiveness of tax incentives in influencing charitable donations. It also makes policy recommendations to strengthen the non-profit sector, a sector that complements the provisioning of public goods and services provided by the government among other roles.

The study hopes to facilitate de-mystifying the linkages between tax incentives and philanthropic giving; to map the different approaches adopted by countries for providing tax incentives for charitable donation and provide, at one place, evidence of the effectiveness of tax incentives on donations, or the lack of it – both equally important from the perspective of policymaking.

About Centre for Social Impact and Philanthropy

The Centre for Social Impact and Philanthropy (CSIP) at Ashoka University is India’s first academic centre focused on enabling strategic and robust philanthropy for social impact. It strives to provide civil society with evidence-based research and knowledge products to grow scale and impact, convening platforms for norm-setting and collaborative learning, and leadership development programmes that strengthen capability and sustainability.

About Centre for Budget and Governance Accountability

Centre for Budget and Governance Accountability (CBGA) is a non-profit, nonpartisan policy research organisation based in New Delhi. It works towards enhancing transparency in government budgets, enabling people’s participation in the discourse on budgets, and strengthening accountability mechanisms in fiscal governance. CBGA specialises in providing credible analysis on various issues in the socio-economic development landscape of India. It is also one of the very few policy research organisations in the country that analyse taxation issues, domestic and international, from the perspective of equity and social justice. 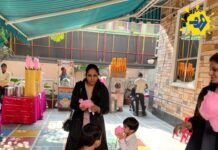