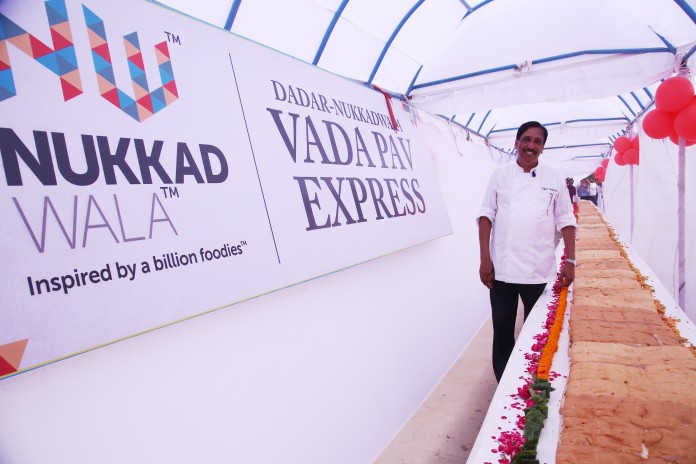 On the occasion of World’s Vada Pao Day i.e.; 23rd August, Nukkadwala, a chain of restaurant which brings street food from across the nation, made World’s longest Vada Pao- measuring 145 feet in length. The same has been considered by the Limca Book of Records which they will be featuring in their 2018 issue. This dish which is often affectionately called the Indian burger is the staple of Maharashtra. This longest ‘Indian burger’ was displayed at Vatika Business Park, Sector 49, Sohna Road. It was inaugurated by the Chief Guest Pawan Soni, famous food critic and founder of famous food blog Indian Food Freak. The preparations were going on for 3 days and the final product (Vada Pao) was finally made within a record time of just 3 hours. More than 2500 people attended the event and feasted on the Vada pao.

Gaurav Bhalla, MD, Nukkadwala said, “I think we take our street food like Vada Pav for granted. We wanted people to know about the World Vada Pav Day so we decided to celebrate it in our very own unique Nukkadwala” style. This is the reason we have created the world’s longest vada pav to celebrate the occasion.”

A team of 25 people from Nukkadwala headed by Chef Ajay Sood, were involved in the making of this longest Vada Pao. 200 kilograms of potatoes and 200 kilograms of bread were used for the same.

Pawan Soni said on the occasion, “I would like to congratulate Nukkadwala for making history by creating World’s longest Vada Pao. The delicacies brought about by them retain the regional flavour, the vada pao for example has the original flavours and anyone who eats it would be reminded of the one made in Mumbai.”

Nukkadwala™ represents India’s newest chain of QSR (Quick service restaurant) smart and stylish restaurants, for the value conscious. Their inspiration is the more than five million street vendors across India who peddle tasty morsels every day to ensure that Indians eat their way through the streets of the country. The QSR chain serves street food from all corners of the country reflecting regional diversity. They offer interesting and unique foods like Dabeli from Gujarat, Vada Pav from Mumbai, Benne Dosa from Karnataka. They have introduced summer special drinks which include Aam panna, Neembu paani, chaach, shehtoot sharbat, phalsa sharbat. They have more than 40 dishes from across the country divided into breakfast, snacks, meals and desserts.