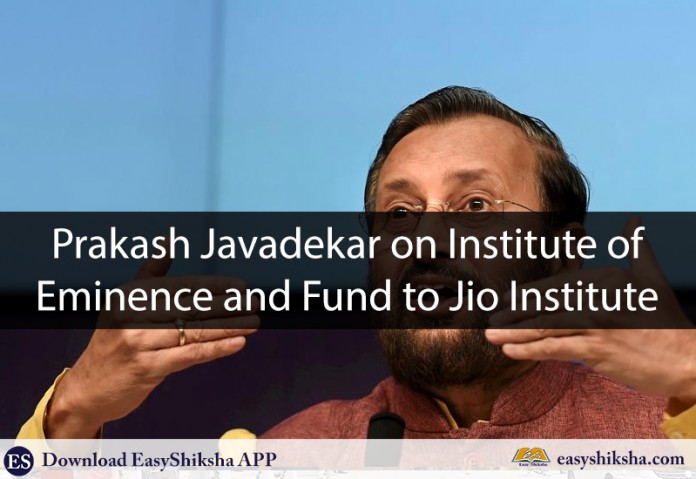 During Question Hour in the Rajya Sabha, several members sought clarity on the criteria on the basis of which the prestigious title was conferred on select institutions. HRD minister Prakash Javadekar said a committee of experts had made the selections after a thorough scrutiny. Mr Javadekar categorically told the House that the Jio Institute has not been declared an ‘Institution of Eminence’.

Members also raised the issue of alleged starvation deaths of three sisters in Delhi. BSP leader Satish Chandra Mishra asked whether the government had taken note of the incident. Minister of State for Planning Rao Inderjit Singh said the incident was a very “unfortunate” but it needed to be seen under what circumstances the deaths took place and whether starvation was the reason. Mishra expressed dissatisfaction with the minister’s reply, saying the media had reported starvation as the reason. The minister said that not everything that appeared in newspapers was “gospel” and added that the reports needed to be verified.

When CPI leader D Raja sought to know why top performing institutions like the IIT Chennai or JNU were not included, Javadekar said a panel had carried out the scrutiny and the government had maintained an arm’s length. Raja put up another supplementary question, but before Javadekar could reply, Chairman M Venkaiah Naidu said the questions should be directed through the chair. “The mantri (minister) need not respond just because the Raja (King) has asked,” Naidu commented in a lighter vein.

Annual grant for sports equipment was Rs 5,000 for primary schools, Rs 10,000 for upper primary and upto Rs 25,000 for secondary and senior secondary schools, he said. Allocation for children with special needs was also increased, including a stipend of Rs 200 per month for girls to be provided from class I to XII, he said, adding that the allotment for uniforms was enhanced from Rs 400 to Rs 600 per child per year.