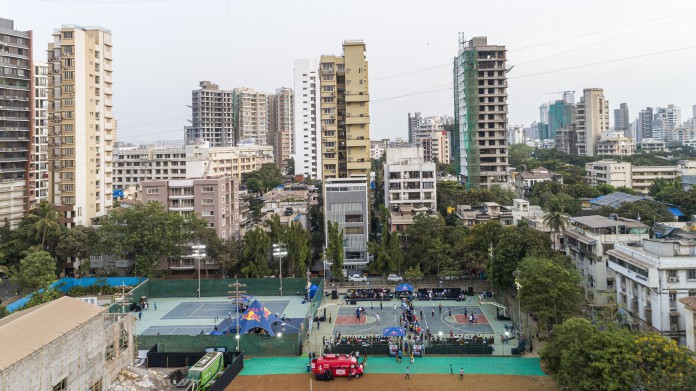 ~ The short action-packed format set to revolutionize basketball in India

~The World’s only open international 3 on 3 basketball tournament

New Delhi, 11th June 2019: Indian Gymkhana, Matunga in Mumbai hosted the first ever India Finals of Red Bull Reign – a unique global 3 on 3 basketball tournament on 8th June 2019. With 16 teams (the winners of the respective 12 city qualifiers and 4 wildcard teams) the national finals witnessed high paced basketball across 39 matches. The semi-final clash saw some high intensity action where Northern Spartans, Amritsar beat Tune Squad, Delhi & Chandigarh 21-14 and Drop Step from Goa beat Income Tax from Ahmedabad 16-14 to make it to the finals. In a tightly contested final, it was Northern Spartans from Amritsar that were crowned the first ever Red Bull Reign National Finals winners after beating Team Drop step from Goa 17-11. Northern Spartans from Amritsar will now get the glorious opportunity of travelling to Toronto, Canada and representing the nation at the World Finals later this year.

The daughter of popular Bollywood movie star Jackie Shroff, Krishna Shroff, who works as a documentary maker and basketball coach was also present at the national finals of Red Bull Reign at Indian Gymkhana Matunga in Mumbai.

Red Bull Reign uses a unique set of rules based on the gameplay of the FIBA rules. Below are the FIBA 3-on-3 rules:

·      The first team which scores 21 points or more wins the game if it happens before the end of regular playing time.

The tournament followed the round robin format and the teams were initially divided into 4 groups i.e. Group 1, Group 2, Group 3 and Group 4.

The top 2 teams of the 4 groups were further divided into two groups, Group 1 and Group 2.

The top two teams from Group 1 and Group 2 faced each other in the semifinals.

Northern Spartans from Amritsar beat Drop Step Goa in the finals to be crowned the first ever Red Bull Reign National Champions.

Amritpal Singh from Northern Spartans, the national champions of Red Bull Reign 2019 said,“We are elated to be the first India Champions of Red Bull Reign. Energy drink Giant Red Bull is doing a great job in promoting 3×3 basketball in the country and it is definitely giving wings to young basketball players to participate and showcase their talent. Tournaments like Red Bull Reign will help to redefine the future of 3×3 basketball in our country. We look forward to travel to Canada and compete against top teams across the world. We hope we make our country proud”

Rakesh Singh of Team Singh, Mumbai City champions of Red Bull Reign said “We are so elated to be the Mumbai Champions of this fast paced 3v3 basketball tournament organized by energy drink giant Red Bull and we got a chance to play against the top teams across the country for national champion trophy. Street Ball is life.”

With this initiative, energy drink giant Red Bull aims to create a new fan base for basketball in India by promoting basketball at a grassroots level and through wider outreach plans for both viewers and players. Also, Red Bull Reign is the World’s only open international 3 on 3 basketball tournament. Red Bull brought on-board Pursuit India as a partner to manage tournament operations across the country. Pursuit India is a leading sports management company in the sport of Basketball in India

Red Bull Reign is a unique 3-on-3 global basketball tournament, challenging the world’s top ballers to put their skills to the test for a chance to be crowned street ball champions. The dynamic competition pits hoop hopefuls from 14 nations against one and other in a high-endurance, offense-driven battle, culminating in the Red Bull Reign World Final. #redbullreign @redbullreign