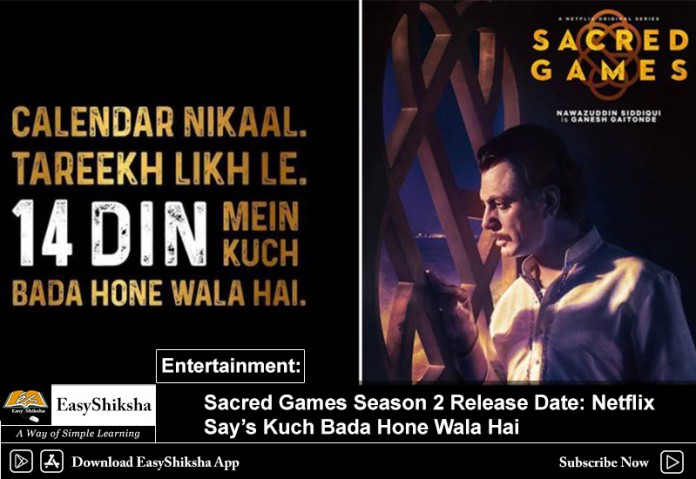 Netflix’s gangster drama Sacred Games ended on a mind-tickling cliffhanger and hence, the second season is highly awaited by fans. Much to the surprise of the viewers, Netflix has officially announced that something big is in store in the next 14 days in the Sacred Games universe. Netflix India took to Twitter to share the news, letting fans to wonder if its release date of Sacred Games Season 2 or perhaps a trailer release?

As per the tweet, the next 14 days if we calculate comes out to be April 1. Thus, keeping in line with the previous announcements, the makers indirectly might have shared on social media the date on which the second season of Saif and Nawaz’s web-series will go on air. Now, it will be released on April 1 or will it be an April fool joke, we will have to wait and see.

Based on the book of the same name by Vikram Chandra, Sacred Games became a global hit, receiving praises from all quarters. The first season of Sacred Games was directed by Anurag Kashyap and Vikramaditya Motwane. The second season, however, is being co-directed by Kashyap and Masaandirector Neeraj Ghaywan while Motwane serves as show-runner. Here’s what viewers can expect from the second season. 1. Actor Saif Ali Khan will be back as police officer Sartaj Singh in the second season of crime drama series Sacred Games. 2. Season 2 will be back with a new trail of betrayal, crime, passion, and a thrilling chase through Mumbai’s underbelly. 3. The second season picks up from Sartaj pursuing his relentless battle of saving the city and Ganesh Gaitonde (Nawazuddin Siddiqui) facing bigger challenges to retain his position as the legendary kingpin of Mumbai. 4. The intriguing Guruji (Pankaj Tripathi), introduced in season one as Gaitonde’s third father’, plays a pivotal role in unfolding a chain of events that shape the next season, which is scheduled to film in India and locations overseas this fall. 5. Filmmaker Anurag Kashyap will continue directing Gaitonde’s track, while Neeraj Ghaywan will take over Sartaj’s plot. Vikramaditya Motwane and Varun Grover will continue their roles of being the showrunner and the lead writer respectively. ——————————————————————————————————————————————-