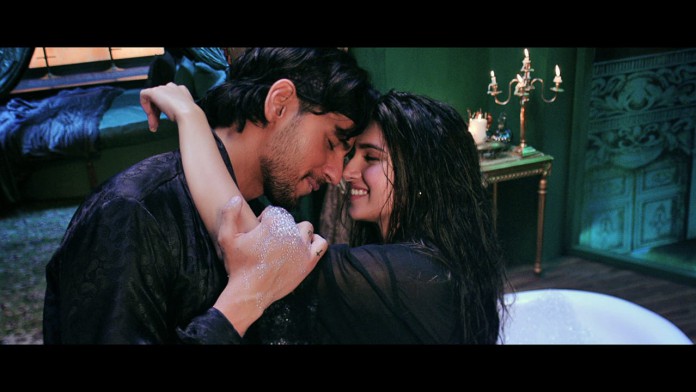 Sidharth Malhotra and Tara Sutaria’s pairing in Marjaavaan received a huge thumbs up from the audience, as their chemistry and the film’s music made sure it was a success at the box office. Now, Bhushan Kumar and T-Series have got Sid and Tara back together, yet again, albeit for a music video. Both of them will be seen romancing each other in Tanishk Bagchi’s recreated version of the hit Delhi-6 track Masakali.

The idea was to give the popular melodious AR Rahman number, written by Prasoon Joshi a contemporary twist. Titled Masakali 2.0, it has been sung by Sachet Tandon and Tulsi Kumar, with additional lyrics by Tanishk.

Choreographed and video directed by Adil Shaikh, it has been designed as a naughty-romantic track, featuring Sid and Tara sneaking into a hotel room and finally getting caught.

Sidharth Malhotra says shooting the song has been a lot of fun. “Masakali is an indoor song, which has more relevance today because all of us are staying in and staying safe, given the current situation. That time, we unintentionally made a song on the same situation where two people are trying to stay indoors and had fun, did masti. That was the feeling on the set. I’m looking forward to it,” he asserts.

Talking about the recreated version, an evidently happy Tara says, “Masakali 2.0 was wonderful to film and such fun to rehearse for. Sid and I rehearsed only once but we managed to shoot the whole song so quickly and effortlessly, it was a breeze! Masakali is such a loved song from Delhi-6 and it’s so catchy despite being a mid tempo tune. I loved the original version and I think Bhushanji and Tanishk have re-imagined Masakali 2.0 beautifully. Tulsi and Sachet have given it a fun and sexy spin which I love! It’s amazing to have had yet another great song to work on.”

Bhushan Kumar, head honcho of T-Series, who has bankrolled the music video tells us, “We, at T-Series have always believed in backing good music. AR Rahman had created a musical gem in Masakali which has been one of my biggest personal favourites over the years. The song from Delhi-6 had got a lot of love from the audience when it had released back then. Till date, the song is a rage among youngsters. When my team was discussing on doing a recreated version of the song, I thought it would be a good idea to present the chartbuster track in a new fashion. Then, we got Sidharth and Tara for the music video because they look good together on screen. They infused life into Tanishk’s composition. I hope the viewers enjoy this version too.”

Tulsi Kumar who has done the vocals for Tara in Masakali 2.0 says, “Being part of Masakali 2.0 was fun. Firstly, the song from Delhi-6 holds a very special place in my heart because it was very unique and different when it came out back in the day. It had set trends because of its unique poetry that had never been heard before. This recreation by Tanishk Bagchi is shot on Sidharth and Tara so it isn’t just an all male version like the original track. The female part has been introduced in this, and it’s great to be Tara’s voice in this fun number. I hope it will entertain the audience especially during this time of the lockdown and make them party in their homes.”

Sachet Tandon, who has given his voice to Sid adds, “It was fun recording Masakali 2.0. Thanks to Bhushan Sir for this.  It’s an iconic song by Mr. AR Rahman. During the recording I had a flashback of the days when the original song had released and I remember I immediately fell in love with that song then. I’ve always focused on the ‘feel part’ of the songs. While recording, the new sections in the song felt very groovy and contemporary, the singing style was quite dependent on the production of the song and I just felt I needed to be very vibrant and dynamic on the mic.

Bhushan Kumar’s Masakali 2.0, featuring Sidharth Malhotra and Tara Sutaria, has been recreated by Tanishk Bagchi and sung by Tulsi Kumar and Sachet Tandon. The song will be out on T-Series’ YouTube channel on April 8, 2020.