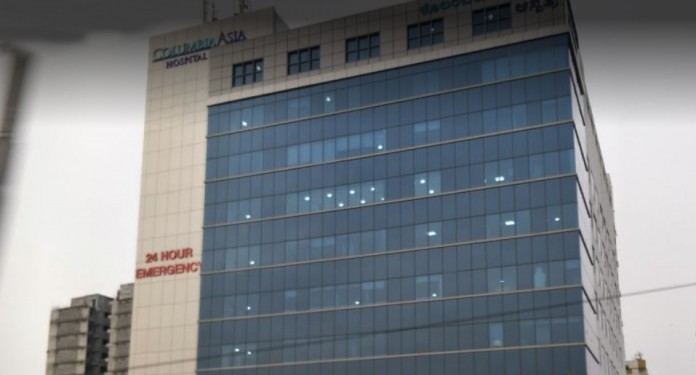 Bangalore, 2nd March 2020: The patient who suffered from a rare heart disease visits India after two years to show his heartfelt gratitude to the doctor from Columbia Asia Hospital Sarjapur Road for saving his life.

Two years ago, in September 2018 Jim aged 58 from California was on business trip to India. On reaching Bangalore the fever that had subsided before his travel flared up and he was immediately taken to Columbia Asia Hospital Sarjapur Road.  Jim was initially administered by the general physicians and after a series of medical examinations, he was diagnosed with disease Aortic Valve. He knew he had a heart valve problem, but never worried because it never affected him. Jim a marathon runner had also participated in a race back home, a month before his visit to India.

Blood culture reports indicated that the bacteria had already started developing in the blood and a re-valuation of the heart revealed a very significant aortic valve incompetence. The whole lot of blood which was being pumped out of the heart was falling back into the heart causing a severe strain on the heart. Because of this there was fluid collecting in his lungs and the other organs weren’t receiving enough blood, resulting in gradual failure of the kidneys and liver.

It was clear that the infection was destroying the valve and the heart muscles. The antibiotics given would not clear the infection unless source within the heart was removed. This meant undergoing an open-heart surgery to replace the infected and destroyed valve and its surrounding tissue. This was a tough call for the cardiac surgical team, as on one hand if they waited to see whether the antibiotics worked, the kidney and liver failure would worsen making the post- surgery recovery difficult. On the other hand, if they went in and operated, there was a good chance that the valve they replaced would also get infected and patient’s condition would be worse.

Dr Joseph Xavier, Senior Consultant- HOD & Chief of Cardio Thoracic & Vascular Surgery, Columbia Asia Hospital Sarjapur Road said, “I am happy that Jim is healthy and fit. It was a difficult decision then to operate on active infection of the heart valve as the tissue inside was in a state like butter and it is very difficult to fix the valve in such cases. Also, the possibility of the implanted valve getting infected was very high in such a situation. The failing organs like kidney and liver due to the bloodstream infection were an added risk. The surgery was successful. We are happy that he is back to India and will always carry back home good memories”.

Jim said “My deepest gratitude to the team of doctors at Columbia Asia Hospital Sarjapur for treating me with excellent care and saving my life during my visit to India 2 years back. Dr. Joseph Xavier gave me second life and am fit and healthy now. India will always be special to me and I will always cherish throughout my life”