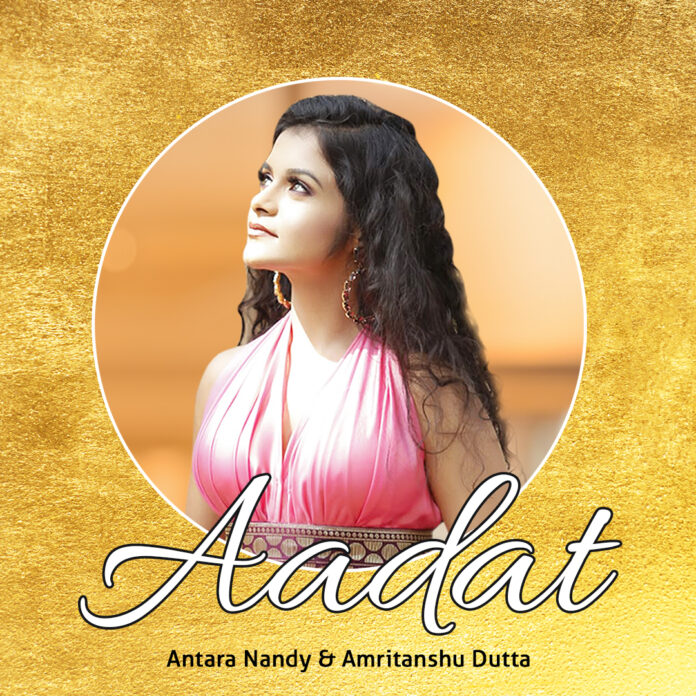 Mumbai/Pune, 10th August, 2021: Viral singer-songwriter Antara Nandy has released her harmonious new single, “Aadat.” Featuring noted classical guitarist Amritanshu Dutta, “Aadat” is a song that symbolises the power of strength in love. Qyuki artist,Antara Nandy, who shot to fame during last year’s lockdown with the Balcony Concert series on social media, is best known for being among the top 10 of A.R. Rahman’s YouTube Original show ARRived and a finalist on the iconic reality TV series Sa Re Ga Ma Pa Lil’ Champs (2009). With “Aadat,” Nandy pushes the musical ante, weaving in mellifluous flute interludes and acoustic guitar parts in the composition, as she and Dutta reimagine Indian classical rhythms for the present generation. “Aadat” marks their second collaboration after 2019’s “Aayi Re Badraa”.

In the accompanying music video for “Aadat,” Nandy is seen wading through the lush verdure of a forest. A falling leaf catches her eye and she pursues the offering of nature while reminiscing about her love. She is lost and found in the rays of sunlight that filter through the foliage. Clips of rustic discovery and fireworks weave in as Nandy’s rich vocals lead the listener on an evocative audio-visual escapade. The music video culminates in a celebration of colour as Nandy steps onto the seashore and paints a vibrant love in all its luminous hues. Always an aficionado of nature, Nandy welcomes the Earth into “Aadat” too, making humanity’s everlasting home a part of her new romance.

Aadat is a song that very close to my heart. It explores the bitterness nuances of being in love, the strength that it gives you and fear of being seperated from your loved one. Amritanshu Dutta and I have worked on this together in an attempt to keep the essence of Indian Classical Music alive through our origin. I really hope and pray that the chords of this tune strike right with the audience and they like our work. I also want to thank Qyuki for supporting me and constantly pushing me to do better.

The vocalist, composer and songwriter, who has previously collaborated with Oscar and Grammy Award-winning musician A.R. Rahman (Ganga, Nis Din, Mission Paani Anthem), as well as performed alongside Indian music legends Udit Narayan and Ranjit Barot, is all set to release 5 more original songs this year. As an independent musician, Nandy has put out 5 singles in 2021 so far (as part of the duo Nandy Sisters), including the Indo-pop bangers “Ishq Wale Mail” and “Takayaka Makajhum.” Being the first person in her family to pursue the arts, it’s Nandy’s vision to offer listeners a limitless music experience. Fans can expect Nandy to explore different genres and bring forth never-before-seen facets of her artistry in upcoming releases.

Co-Founded by Samir Bangara, A.R.Rahman and Shekhar Kapur, Qyuki is a data-driven new media company which discovers & invests in India’s most influential creators to help them rapidly grow their audience, create content and launch new IPs. Qyuki has to its name several premium formats like ARRived – a singing talent hunt show with A. R Rahman as a mentor, Jammin’ – a collaboration-focused music show where legendary Bollywood composers and India’s top Internet icons create original tracks – and NEXA Music – a nationwide talent hunt for English-language singers. In Jan 2020, Qyuki created a breakthrough format of fan festival called Epic Fam Jam, which brought together India’s biggest online sensations – in thematic mini-worlds of their own for superfan meetups – topped with incredible live performances. Qyuki also exclusively manages a host of talent across various digital platforms including Youtube, Instagram, Snapchat and Josh.