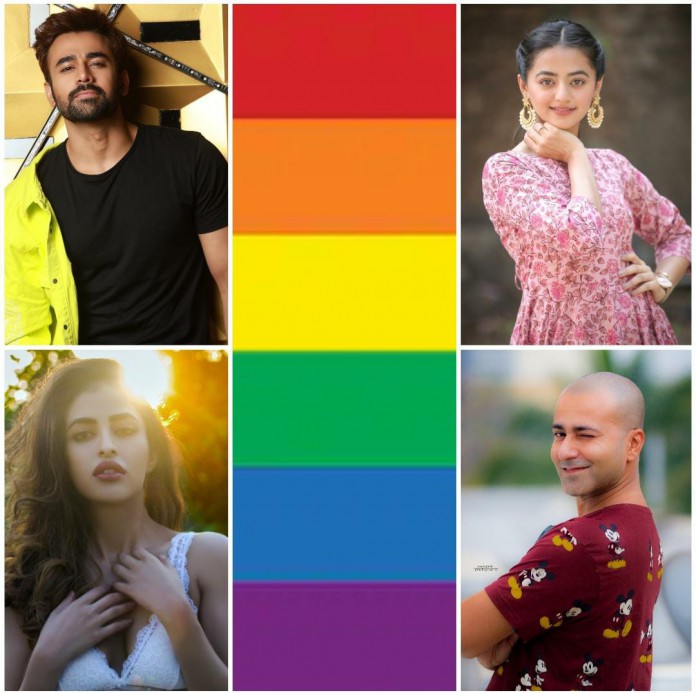 An Annual LGBT Pride Celebration Every year, during June, the LGBT community celebrates in several different ways. Parades are a prominent feature of Pride month, and there are many street parties, community events, poetry readings, public speaking, street festivals, and educational sessions all of which are covered by mainstream media and attracting millions of participants. In a conversation with our actors about the same, we got to know about their liberating thoughts and strong support for the LGBTQ+ community and they also shared their happiness about a celebration of a community which is all about colors of confidence, acceptance, appreciation, and self- love.

We got some really beautiful answers to these questions from each one of them.

1. How do you feel about such an amazing way of celebrating the LGBTQ community for a whole month as the “Pride Month” in June?

2. Do you believe that people of our India still have a long way to go regarding treating the LGBTQ community as equal?

– For a community that has been deprived of their right to equality all this time and has fought for their identity just for being different, this is the least that could be done.
I believe it is just amazing to celebrate the existence of such a powerful community.

– Though it shouldn’t have been like this in the first place people of India are finally accepting for the community just the way they are. It will definitely take time but it feels so good that we are on our way.

– The LGBTQ+ community has always been looked at with a perception of abnormality which cannot be justified in any way. The community is has been judged for being different but they have surely fought and got over the obstacles of discrimination, judgment, and narrow minds. They have every reason to celebrate this victory and their existence.

– It’s difficult to change one’s perception or beliefs about something and it will take time but I think we’ll get through as it all works with bay steps and currently, more and more people are accepting the LGBTQ+ community just the way they are, people are coming out of the closet without the fear of being judged as the majority of people are accepting the truth. I hope the whole country reaches to utmost acceptance for the LGBTQ+ community.

-I think every community has the right to celebrate themselves whether it is the minority groups, LGBTQ+ groups, black people around the world, everyone should celebrate their life and lifestyle. God has created us all equal and we should not discriminate on anything. And I think discrimination based on color, caste, or sexuality is the least form of human behavior. I think it’s great that the LGBTQ+ community celebrates this whole month as their pride month. They should be proud of themselves, everybody should be proud of themselves. Gay means being more happy, alive, and different and that’s their way of showing how happy they are in their life and why not as long as nobody is getting hurt. Everybody should have the right to celebrate their life the way they want.

-So I guess in metropolitan cities or big cities like Bombay, we see a lot of LGBTQ people and in our industry also and they are treated well and equally but I guess small towns and villages they still haven’t accepted it fully. Yes, it got legalized in India but people of India have a long way to go to accept them properly. The Lalit’s chairman, Mr. Suri has been doing a lot for the LGBTQ community. He has been holding classes also and teaching children about the community. So these things should happen, the corporate sector have also a lot of LGBTQ community people in them but they don’t come out easily because there is a lot of preconceived notions about them. India has to go a long way the people of India have still not accepted this.

– It really feels great to see the community is celebrating themselves, it is everyone’s right to celebrate their and existence, choices, and reality. The month of June reminds us of a community full of colors.

– In India, there exists a taboo about the LGBTQ+ community today also where there are people who are still not ready to accept the reality but we also have people who are accepting them as they are. For so long the community has been fighting for their rights and they deserve equality, love, and respect they deserve. Though we still have a long way to go I’m sure things will better each day as we are getting more aware.