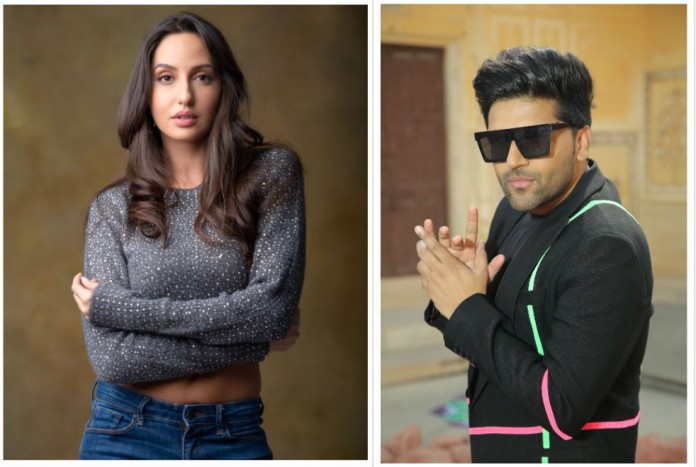 After doing solo projects for Bhushan Kumar’s T-Series, the gorgeous Nora Fatehi and the incredibly talented Guru Randhawa have teamed up for the producer’s music video for the first time ever. When it comes to new age music and youth pop sensations in India, one name that stands out is that of Guru Randhawa. Similarly, talk about dance and performance in music videos, and there’s nobody even close to Nora Fatehi.

Nora, who featured in Guru Randhawa’s Lagdi Lahore Di in StreetDancer 3D, recently shot for the singer’s new single ‘Nach Meri Rani’ produced by Bhushan Kumar. An original composition by Tanishk Bagchi, who recently teased his fans about working on something big and exciting, is sung by Nikhita Gandhi with Guru Randhawa.

The young fresh pair rehearsed rigorously with choreographer Bosco and his team for 7 days prior to the video shoot. This peppy dance track is conceptualized and created by team Retrophiles who have come up with a never seen before video idea which is new and innovative.  The High Rated Gabru singer drove down to Mumbai last week where Nora and he shot the video with a limited crew, following all safety precautions.

Talking about it talented singer Guru Randhawa says, “I’m super stoked as almost after 5months we shot for a new track. It’s something fresh and the song has a very upbeat groovy vibe to it like my other songs. Post lockdown, it was the first shoot we did in Mumbai in a week’s schedule following all safety precautions and government norms. It was fun collaborating with Nora for the video and to match up to her craft, bosco sir did a great job. I’m thankful to everyone who made this possible and super excited for my fans to hear it”

Nora informs that she rehearsed for five days for this single. “I am so excited to be collaborating with Guru for the first time in a music video. I immediately agreed to be a part of this project because the song is so peppy and catchy. Guru is an amazing singer and I am sure, it’s another huge dance track”, Nora says.

Says T-Series head honcho Bhushan Kumar, “Guru Randhawa and Nora Fatehi are a dynamite combination and we are so excited to bring them together with ‘Nach Meri Rani’. We at T-Series are keen to try to bring forward different genres of music and video concepts. We really wanted to push the envelope with this music video since both of them are masters of their craft. The concept is very forward and innovative and I’m glad we managed to pull it off. The video has turned out spectacular and is a must-watch.” The producer informed the song is under post-production and will be launched in a month or so.

While we have had casting coups in Bollywood, this is possibly one of the most anticipated associations that we have seen in the music arena in a few years. Nora has always been hailed as the queen of music videos and Guru has rocked the charts with his record-breaking music. Together, they make for a lethal combo with Bhushan Kumar being instrumental in bringing the two talents together!