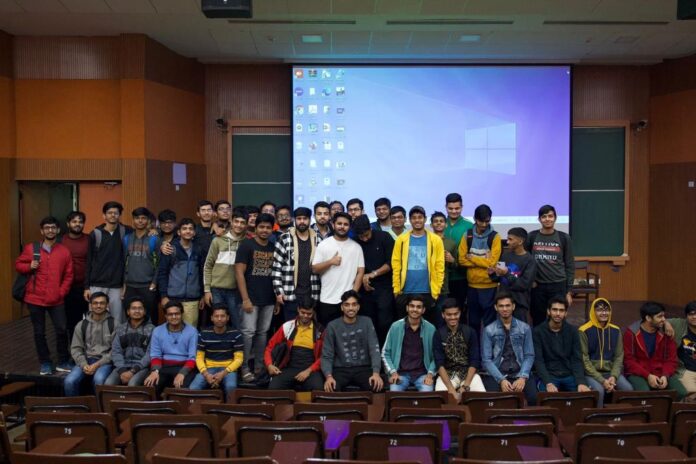 National, 13th December 2022: Chemin Esports, one of the leading Esports companies, in association with FEAI organized its next campus connect program at IIT Kanpur between 3-5th Dec 2022, to make esports the next big thing in the market. Chemin Esports had earlier announced their association with the Federation of Electronic Sports Association of India (FEAI), the national apex body for Esports in India, and had started planning tournament series around reputed Indian colleges and universities to create awareness about esports as a career opportunity and a growing community in India.
The event began on December 3rd, 2022 with a panel discussion with personalities like, the Founding Directors, UP Ahead Esports Association, Founding Members, FEAI – Mr. Sanjeev Singh and Mr. Siddharth Upadhyay, along with Founding Member FEAI – Mr. Abhishek Issar, and the Director, Chemin Esports – Mr. Diptanshu Saini, as the guest speakers for the event. The panel discussion was followed by a talk show dedicated to esports with leading esports athlete Ammar ‘destro’ Khan and Robin Singh.

The panel discussion was started by Mr. Sanjeev Singh praised “a strong institution like the IIT Kanpur to have supported this initiative intended for the betterment of the Esports ecosystem, in a sector that is growing at greater than 20%, and such initiatives should be supported by other educational institutions from the State moving forward.” The discussion was taken forward by Mr. Siddhartha Upadhyay, who talked about the opportunities the in sector stating “globally, esports industry has become a multi-billion dollar business, and as Indians, we are pretty skillful when it comes close to information technology, or computers, or any electronic device, and we are very adaptive. So I am sure very soon we will have more coders, programmers, gamers, champion players, proving that there is a huge opportunity for us.” He also added “the UP Ahead Esports Association will write to the UP Govt with a submission on the Esports policy to look at formalising this sector.”

Mr. Diptanshu Saini talked about how the industry is growing on its own without extensive marketing and added “if you are building your career on your passion, there is no stopping, also there are massive opportunities in esports sector for everyone.” Mr. Abhishek Issar raised a policy led question to the panel, “There are ample of opportunities for an esports athlete to be part of the ecosystem, how is Uttar Pradesh shaping out with respect to the young segment of esports?” to which Mr. Sanjeev Singh replied that “We are looking for a government policy for promotion of the sector and UP might be one of the first states to come up with such a policy.”

Tours started in November this year and one such tour was organized at the prestigious IIM Indore, where Chemin hosted the FIFA 23 tournament. The second tour was at Sikkim Manipal Institute of Technology, where Chemin hosted Valorant, Call of Duty Mobile, 8Ball Pool and FIFA 23 tournament in their cultural fest Kaalrav 2022. The third one was at BITS Pilani, Hyderabad Campus, where Chemin eSports hosted Valorant and FIFA 23 at their cultural event, Atmos 2022. The fourth tour was organized at IIT Kanpur, where Chemin eSports hosted FIFA 23 between 3-5th Dec 2022. This was followed by a panel discussion.

To support FEAI’s emphasis on developing esports across every Indian state through regional chapters, the association with Chemin Esports for the tour will lead to a more robust and faster development of esports in India. With the current outreach of FEAI and the active user base of Chemin esports of almost 1 lakh esports players globally, this program series will help both the organizations to nurture the aspiring esports talent who can become a top esports athletes in India. All participating players will also be registered as officially recognised sports players with the FEAI.

Mr. Ishan Verma, Director of Chemin Esports, said, “As we moved onto our 4th Stop under the University Programme, I am happy to see the participation in such events. Students are eager to participate and learn about esports as a future option. The programme has just started and our aim is to cover more than 100 colleges by the end of 2023.”

Commenting on the association and tours, Mr. Sanjeev Singh, Founding Member, FEAI said, “We are so happy to see that people are recognizing Esports; we want to spread awareness about the esports industry as a growing community in India and as a viable career option. This program will definitely be a huge one for strengthening grassroots connections. We have successfully organized the 4th campus connect program at IIT Kanpur and witnessed amazing talent and met aspiring esports enthusiasts. At last, we are sure that the association will create wonders and partnership will further boost engagement.”

The campus connect programs will be scheduled at different colleges and universities in the next 4-5 months across different regions such as Jammu & Kashmir, Andhra Pradesh, Arunachal Pradesh, Assam, Bihar, Nagaland, and all other states of India. The participants will have to register themselves on FEAI’s website and there will be a two-day tournament. Every participant will receive a participation certificate, with the winners getting recognized as esports athletes by FEAI. The certificate will not only give recognition but also provide access to the FEAI roster of events throughout the calendar year. Also, the participants with huge potential, talent and enthusiasm will get a chance to be a part of the esports academy and train under the guidance of international coaches. With all these achievements, participants securing a podium finish will also receive hampers.

Chemin eSports is an eSports organization, built around making and training different rosters of teams across a variety of games at different platforms.  They also act as a Talent Incubator and help build eSports stars as well as aspiring content creators in the field of gaming. They organize community tournaments for gamers along with hosting online and offline events, LAN parties, Pubstomps (viewing/watch parties), game launches, experience zones, themed parties, etc. They aim to help talented athletes achieve their maximum potential by providing them a platform to build and advance their career in eSports.

FEAI is the apex national body for Esports in India. FEAI is an athlete-first organization that aims to ensure opportunities at the grassroots in a transparent ecosystem to develop India’s Esports champions. FEAI’s mission is to develop an inclusive, safe, healthy, and sustainable Esports ecosystem with a particular focus on responsible gaming, holistic wellness, fair play, education, and career pathways for players and athletes. FEAI encourages and promotes innovation, showcasing the responsible use of technological development including AI, VR, AR, ML, IoT & 5G. FEAI fosters grassroots opportunities in Esports through the staging of international, national, regional, state, and district-level events throughout the year.