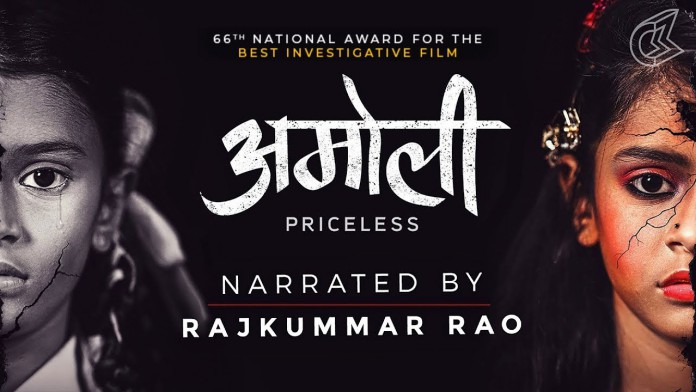 ~Won under the category of ‘Best Investigative Film’ of the year, Culture Machine becomes the first digital media company to be honored with this award~

Starring the renowned stalwarts of the film industry – Vidya Balan, Rajkumar Rao, Kamal Hassan, Nani, and Jisshu Sengupta as the narrators, Amoli’ is a definitive documentary on the repulsive commercial sexual exploitation of children, a deep-seated and well-organized criminal industry.

Released in seven languages, the documentary is narrated in 4 chapters – Mol (Price), Maya (Illusion), Manthan (Internal conflict), Mukti (Liberation). Each chapter takes the audience on a journey that delves deep into the grimdark world of child sexual exploitation.

Speaking on the remarkable achievement at the 66th National Film Awards, Sameer Pitalwalla– Founder and CEO, Culture Machine said, “It is a proud moment for the company to have been honoured with such an esteemed award. Through Amoli, we tried to create an awareness among people on the scale and human cost of the sexual manipulation of children in India. We are glad to see the appreciation being showered on the documentary.”

The gorgeous and talented Vidya Balan, who narrated the English version of the movie said, “The film Amoli has a strong storyline and I am glad to have been associated with this documentary. It revolves around the heart wrenching story that exposes the ugly business of commercial sexual exploitation of children. I have narrated the English version of the movie. It gives me immense happiness to see it receive the prestigious 66th National Award, and this is definitely a proud moment for the entire team.”

Acclaimed documentary filmmakers Jasmine Kaur Roy and Avinash Roy who directed the movie, quipped on the spectacular win, “The award not only recognizes the hard work put in by the team but also celebrates the indomitable spirit of those who are fighting a constant battle to put an end to child sex trafficking. We hope that this National Award would further help to highlight these voices and bring a stronger law against this horrific crime.”