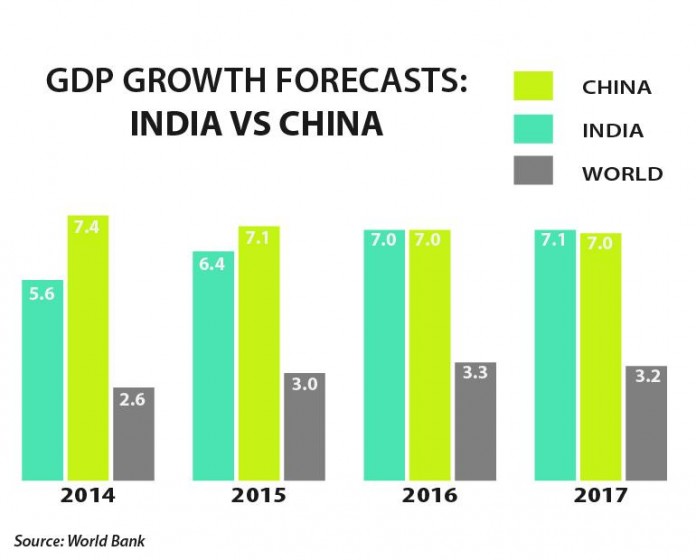 Notwithstanding a sharp cut in the government’s growth forecast at the fag end, 2015 will go down as the year when India emerged as the fastest-growing large economy, despite setbacks such as 12 months of negative export growth, another bad monsoon and roadblocks to the far-reaching goods and services tax regime GDP.

Let us take a ride back on all the important happenings this year with Easyshiksha.

In addition to growth, the economy also saw some positives. Global crude oil prices fell to the lowest levels in over a decade, checking the balance of payments from going awry, inflation rate remained more-or-less under control, despite spikes in food prices, and economic reforms got a big push, notably in the form of further opening up of a host of industries to foreign equity.

India’s real GDP in the first half of the current fiscal grew at 7.2 per cent as per official data, which was slightly lower in comparison to the GDP growth of 7.5 per cent in the previous fiscal.

India’s external position improved at the same time. Forex reserves are a little above $350 billion in November 2015 as compared to a little over $270 billion in July 2013. Net foreign direct investment (FDI) inflows have increased to $17 billion in the first half of 2015-16 in comparison to $15.8 in the same period last year.

However, the global slowdown continued to weigh on exports, which have declined for 12 straight months. The government said this was also pulling down growth but felt the situation would improve in the coming months.

On the fall in the value of the Indian rupee, the finance ministry’s mid-term economic review attributed it considerably to the major devaluation of the Chinese yuan.

The changes overall, however, led many global institutions like the World Bank, International Monetary Fund, Asian Development Bank and some UN institutions to upgrade India’s growth forecast to some 7.5-8 per cent, calling it the fastest expanding globally, surpassing China.

The year also began with India’s changing the way it calculated its gross domestic product under a new series, though the controversy over the changed methodology employed refuses to die down with economists even terming it obscure.

Easyshiksha jots down the highlights of the year in field of development of our country :-

Get Course: The Ultimate Sales Training Blueprint How To Master Sales