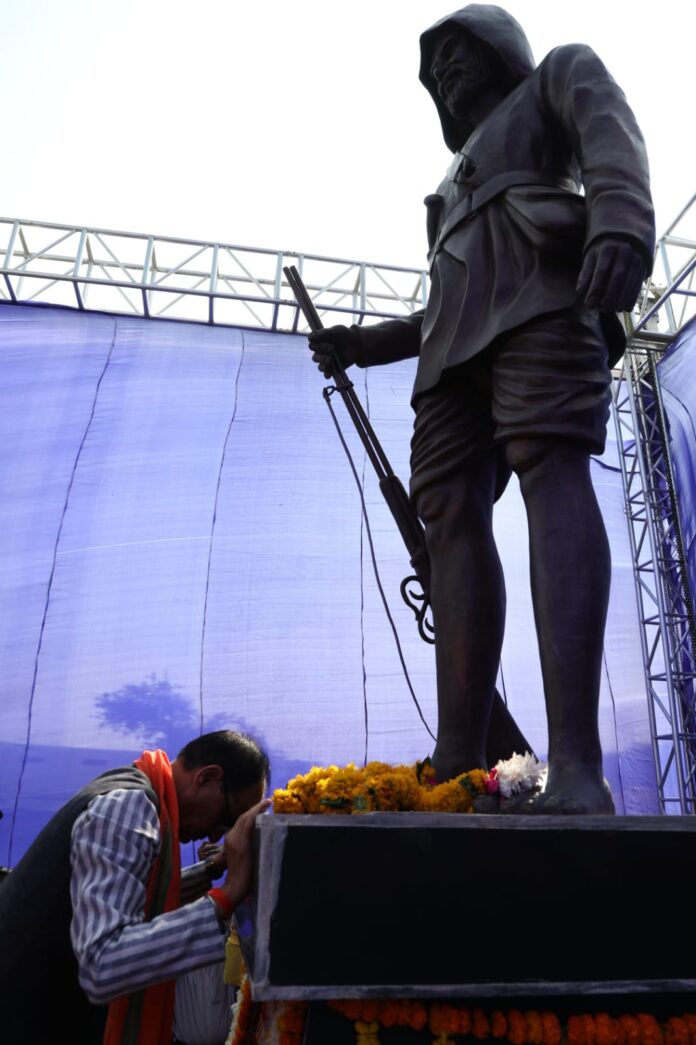 Bhopal, 4 December 2021: As part of the concluding program of Krantisurya Jannayak Gaurav Yatra, a state-level cultural program was organized to mark Jannayak Tantya Mama’s ‘Balidan Diwas.’ The event was organized today at the Jawaharlal Nehru Stadium in Indore. Speaking at the occasion, Hon’ble Chief Minister Shri Shivraj Singh Chouhan said, “I bow to the holy land of Baroda Ahir, where Krantisurya Tantya Mama was born. I salute the holy soil of Patalpani, where Jan Nayak Tantya Mama took his last breath.”  CM Chouhan extended a warm welcome to the relatives of Tantya Mama and members of the tribal community, who were present on the occasion. He highlighted the contributions and efforts made by tribal leaders and the tribal community in building Atmanirbhar Madhya Pradesh.

On this momentous occasion, CM Chouhan read out the gazette notification announcing the implementation of the PESA Act with immediacy. This was received with applause by the public present at the venue. He also stated that the government will revoke minor criminal cases registered against the tribals.

Chief Minister Shri Shivraj Chouhan also informed the public of the many tribal welfare schemes brought about by the current Madhya Pradesh government. He said that the government has launched the Akanksha Yojana to provide best coaching facilities to tribal students to help them in their pursuit of courses like engineering, medicine, law among others. He also informed that due to the thrust provided by this scheme, 740 tribal students have been selected in the prestigious JEE and NEET entrance examinations. He also informed of the Mukhyamantri Medhavi Vidyarthi Yojana, which has helped tribal students receive admission to prestigious colleges of the country in the fields of engineering, medicine, management, etc. Madhya Pradesh government has been consistently developing adequate infrastructure to ensure the upliftment of the tribal community. This has led to the rapid development of facilities like eklavya schools, ashram schools, smart classrooms, computer labs, education complexes and hotels for girls, and so on.

In order to ensure that the tribals can access the right to housing and live with dignity and honor, the Mukhyamantri Awasiya Bhu Adhikar Yojana was launched. Under the scheme, each tribal family will be given the ownership of their land to construct houses, informed CM Chouhan. Chief Minister Shri Shivraj Chouhan also highlighted the benefits and success of the Mukhyamantri Ration Aapke Gram Yojana. Informing about the scheme, CM Chouhan said, “In order to provide PDS ration to Janjatiya beneficiaries in their own villages, the state government had launched the Mukhyamantri Ration Aapke Gram Yojana 2021 on Janjatiya Gaurav Diwas on 15 November 2021. The scheme would cover 89 tribal development blocks of 20 districts of the state, wherein more than 470 vehicles, driven by my tribal sons and daughters will reach the tribal household, from village-to-village.” He further stated that the Shivraj government will be the guarantor of this scheme.

Speaking about the newly launched Mukhyamantri Udyam Kranti Yojana, CM Shri Shivraj Singh Chouhan said, “Your mama has made a provision to provide loans ranging from ₹1 lakh to ₹50 lakh for my young nephews and nieces to enable them to stand on their own feet. The day is near when you all will become employers and create an atmanirbhar Madhya Pradesh.”

Further, CM Chouhan also spoke about the efforts being made by the state government to construct and develop 350 model CM Rise Schools in the state. These schools will be well-equipped to provide education to students from KG to 12th classes. Out of this, 75 schools will be opened in tribal areas.

Recognizing the contributions made by tribal leaders Raja Shankarshah, the Madhya Pradesh government, under CM Shivraj Singh Chouhan, renamed Chhindwara University as Raja Shankarshah Vishwavidyalaya in Madhya Pradesh. CM Chouhan also informed about the conclusive efforts being undertaken by the state government to improve health outcomes among the tribal communities. Consequently, the Sickle Cell Mission was launched to ensure that blood-related diseases and disorders are addressed medically.

The event was marked by the presence of the Honourable Governor Shri Mangubhai Patel, Minister of Tribal Welfare Sushri Meena Singh Mandve, Minister for Culture and Tourism Sushri Usha Thakur, along with other public representatives.