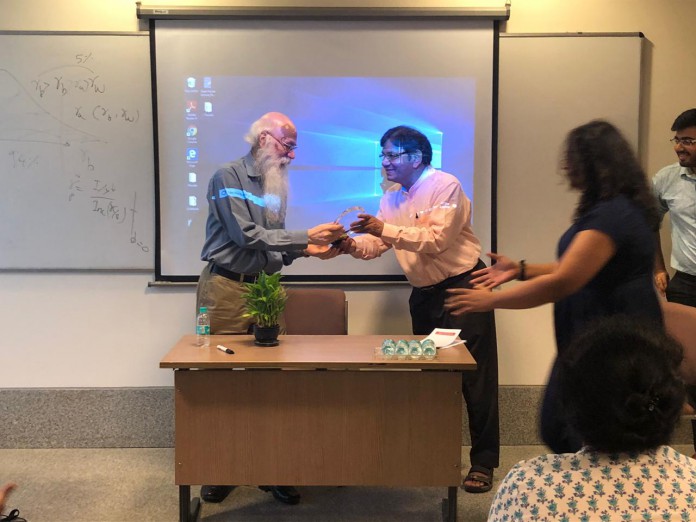 New Delhi, August 27, 2019: Dr. Arun Kumar, Former Economics Prof. at JNU and currently the Malcolm S Adiseshiah Chair Professor at the Institute of Social Sciences, New Delhi, today delivered a public lecture on the topic ‘Missing Dimension of Macro Policy-Making in India: The Black Economy’ at Indian School of Business & Finance (ISBF), one of the five Featured Teaching Institutions (FTI) of The London School of Economics.

During the session, Prof. Kumar shared his insights on ‘Missing Dimension of Macro Policy-Making in India’, which he believed is what enables a parallel economy, the real functioning of Black Economy in India and around the globe. Taking ‘Demonetization’ as an example, he elaborated on various countermeasures taken by authorities around the globe to include the missing dimension. During his interaction, he also shared the various misconceptions that are prevalent with regards to the robust back-door economy, the ‘Black Economy’.

Dr. Arun Kumar taught Economics at Jawaharlal Nehru University from 1984 to 2015. He was also the Sukhamoy Chakravarty Chair Professor in the Centre for Economic Studies and Planning, JNU and has been a Vice President and acting President of the Indian Academy of Social Sciences. He is currently the Malcolm S Adiseshiah Chair Professor at Institute of Social Sciences, New Delhi. He has specialized in Development, Public Finance, Public Policy and Macroeconomics.

Giving the reference of his book, ‘The Black Economy in India’, published by Penguin (India) in 1999, 2002 and 2017, he stated that 62 per cent of the economy is not accounted for in policy-making, as it operates through channels not recorded. His other authored works include, `Indian Economy since Independence: Persisting Colonial Disruption’ (2013), along with `Understanding Black Economy and Black Money in India: An Enquiry into Causes, Consequences and Remedies’, Aleph Publication (2017) and `Demonetization and the Black Economy’ Penguin India (2017). His latest book on GST, titled `Ground Scorching Tax’ was released in February 2019. He has also been awarded the Ricardo Prize in Economics by IIES of UNAM, Mexico in 2013.

During his session at ISBF, Prof. Arun Kumar said “The Black economy not only impacts the overall economy but it also affects other crucial sectors, like Education and Health. The bigger the black economy, lower the money available for the government to disburse for education, which would affect the quality of education, hence promoting deteriorating mediocrity among youth.”

During the occasion, Founder & Director of ISBF, Dr. Jitin Chadha said, “We are glad to have Prof. Arun Kumar as our guest lecture today. His deep knowledge and understanding of economy and policy-making have helped not only the students but also the faculty of ISBF. We have been fortunate to have such insights into policymaking and prevalence of alternative economies and their functioning.”

Prof. Kumar concluded by sharing some short, medium & long term remedies that could be opted to curb the Black Economy followed by a Q&A session with the students.

ISBF was founded with the vision of delivering world‐class education in India. Its undergraduate and postgraduate programmes – in the areas of Economics, Finance, Accounting, Business and Management – all receive academic direction from LSE, and students receive a University of London degree upon graduating. They are taught by an expert and highly qualified group of faculty members at ISBF, and also see deep engagement from LSE academicians, who train ISBF’s teachers as well as lecture students, apart from setting and grading the final examinations of ISBF students.

Today, ISBF is one LSE’s top 5 Teaching Institutions in the world, and also enjoys Affiliate Centre status from the University of London, which is the highest recognition accorded to Teaching Institutions by the university. This ensures that ISBF students receive a rigorous, application-oriented and global education, which is relevant to local needs. Many of them transfer to foreign universities in the second year of undergraduate study, go on to prestigious institutions for higher study, or secure placements in India or overseas with leading multinational corporations.