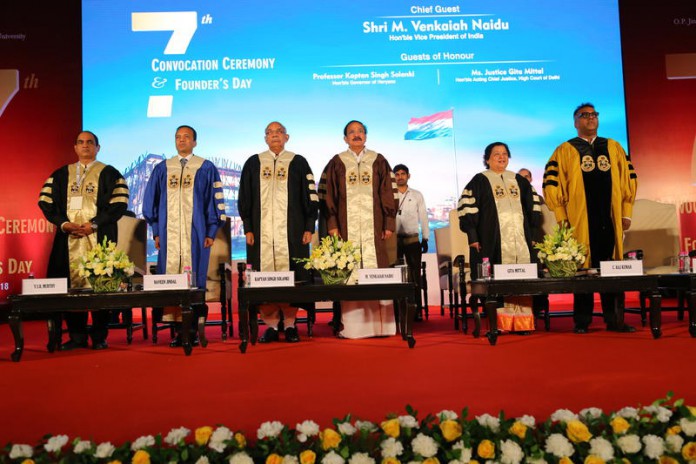 “Education will be the key driver of India’s transformation to prosperity“: Vice President

New Delhi, August 8, 2018: The Vice President, Mr. Venkaiah Naidu emphasized the need to “reorient” the education system in accordance with the changing needs to enable the students to face and overcome new challenges. He urged higher educational institutions to “revamp their methods of teaching, give up business-as-usual approach and create rigorous academic standards”.

He was addressing the seventh Convocation and Founder’s Day Ceremony of the O.P. Jindal Global University in New Delhi on 7th August.

Stressing the need for India to become the global hub of knowledge and innovation, Mr. Naidu said, “We need to build the right ecosystem for academic excellence to thrive by revamping our education system.”

Referring to the demographic dividend enjoyed by India, the Vice President emphasized the need to convert this vast human capital into national wealth creators by imparting the right education, knowledge and skills to the youth.

As India embarks on its journey to become a prosperous middle income country, Shri Naidu observed that “innovative, futuristic universities will be the drivers of this huge transformation” by adding that “education will be the key driver of India’s transformation to prosperity”.

Referring to position of Indian Universities in the global rankings, Vice President said, “We need to change this dismal scenario and infuse new values and future-oriented thinking in our universities, particularly by learning from best practices of other universities around the world which have leapfrogged in a short duration.”  “One key area of reform is the imperative to inspire the best students across the country to take up academics as a full-time career and to retain them as university faculty members”, he said.

Noting that O.P. Jindal Global University has a large number of full-time foreign faculty members recruited from top universities across the world, the Vice President said that more such innovations would be required to connect our higher educational goals with global talent.

The Vice President also stressed the need to create conducive intellectual environment for highly qualified Indians working overseas to come back and work in our universities.

He expressed hope that institutions like O.P. Jindal Global University would fulfil the expectations of raising the quality of learning and research that benefits India’s rise as a major world power. He congratulated the Chancellor of JGU, Shri Naveen Jindal, for ensuring that quality, research and academic excellence are the cornerstones of JGU.

Speaking on the occasion, Professor Kaptan Singh Solanki, Governor of Haryana said that JGU is not just the pride of Haryana but also shines bright amongst the private universities of the country. He urged the youth to think for the country and work for a strong nation by reminding them of Mahatma Gandhi and Rabindra Nath Tagore’s vision of a country which is free of poverty, corruption and violence.

In his address, Chancellor, JGU, Mr Naveen Jindal said, “Today is a special day since it is a day of celebration, reflection and gratitude for all. It is my father’s, Shri Om Prakash Jindal’s, 88th birth anniversary and we created JGU in his memory.  He always said that education is the greatest gift that can be given to anyone. I wish he was here to see the incredible work that has been done all over the years. JGU is an example of the contribution we have made to the country. All students here must thank their parents for their sacrifices and contributions to help you make your career. I would like to thank Prof. Raj Kumar and the 300+ faculty members who are the main force of the professional success for the graduating students. These students are the University’s ambassadors and we all hope that they keep the JGU flag high”.

Gita Mittal, the Acting Chief Justice of the Delhi High Court implored the graduating students to inculcate hard work, humility and honesty for their success. Urging students to compete with themselves, she also asked them to care for not so privileged, as they succeed in their careers.

In his welcome address, Professor (Dr.) C. Raj Kumar, Founder Vice Chancellor said, “The Seventh Convocation is an important milestone in the University’s history as we mark more than half a decade of graduating students who have gone on to make significant contributions to our society and economy. This year also marks the ninth year since our founding. Having made a modest beginning in 2009 with one school, a few programmes, a small number of students and around 10 faculty members, JGU has made steady progress in expanding to become a full-fledged university with 11 undergraduate, 6 postgraduate and Ph.D. programmes offered by its eight Schools, over 4200 students and over 330 faculty members. This is a huge responsibility and we are taking our aspirations and commitment to excellence across all our programmes. In the years ahead, we hope to consolidate our programmes and learn from experience to further improve our capacities to contribute to the field of higher education.”

On his 88th birth anniversary, the guests and dignitaries paid rich tribute to Mr. O.P. Jindal – a visionary leader in whose memory JGU was established.

JGU achieved distinction in 2018 by breaking into the global university rankings. JGU has been ranked in the 251-300 rank bracket of the QS University Rankings: BRICS 2018 Edition. JGU is the youngest Indian university to feature in these rankings. It is ranked in the top 300 universities out of 9,000 universities in the BRICS region (covering five countries – Brazil, Russia, India, China, South Africa), placing in the top 2.8% of the universities in the BRICS region. It is also the first and only private university in Haryana to have been ranked in an international ranking.