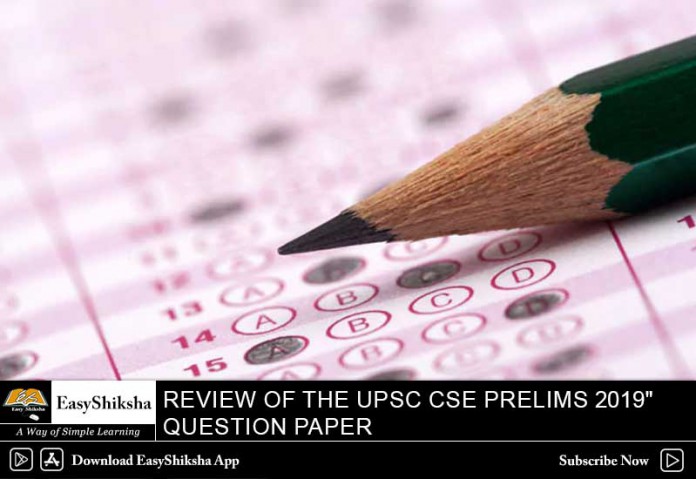 It is very usual for the UPSC Preliminary questions to have multiple sub-questions hidden in one question. This year was no different in that sense. This also makes the classification of a question into various disciplines as tentative because such sub-questions within one could be linked to different disciplines. “So please take this division that I am giving you with a pinch of salt,” qualifies Dr. Khan.

This year’s PT paper was such that questions were requiring more of conceptual clarity rather than mere command on facts or rote learning. “In fact, I can say that if you have not been reading a few weeks before the examination, your performance is not going to be affected,” says Dr. Khan. In effect, this year’s question paper is more conceptual and less factual and students who had been preparing over a long period of time could be better placed to identify the right answer. Such concept-based questions came from most of the disciplines including History, Geography, Economy, Political Science and General Science.

Another important feature of this year’s question paper is that there was a marked increase in the opinion-based questions. According to Dr. Khan, through such questions the UPSC has been testing the reasoning sense of the students. His advice to the students to tackle such question: “When you are reading, don’t just stop at the facts, go beyond and think in your mind and then see what all dimensions that issue could have and what all opinions could be formed on that issue.” He also adds that when students are reading History, they must investigate the cultural perspective simultaneously. This is particularly important in questions dealing with painting and architecture where the cultural components have to be accounted for.

In Geography, there were a large number of regional questions that came up this year. Such questions require careful map reading and are generally considered easy to solve. In Geography too there were some questions which were conceptual in nature. This year also saw the return of the traditional regional questions such as those related to cities, rivers and glaciers. This underlines the fact that there is no fixed pattern in the UPSC.

Apart from the opinion-based questions, there were also some common-sense questions. However, answering such questions require deeper understanding of the issue. Dr. Khan suggests that it is important to develop the reasoning capacity for successfully answering such questions that are based on opinion or common-sense. Similar approach should be adopted in the policy-based questions which also saw an increase in this year’s UPSC Civil Services Preliminary examination.

As there has been a constant increase in the policy-related questions, it is important that students keep an eye on policy changes, legislations brought about as well as the new Supreme Court judgements. Dr. Khan suggests that such issues should not only be covered as part of the Current Affairs but also taken up in their proper context. For instance, when one is reading about ‘right to life’ or ‘right to freedom’ or ‘right to liberty’, one should look into all related developments in that field. Such issues must invoke some kind of understanding in depth, not just factual cognizance. Finally, there is certain bias in the International Current Affairs issue.

Overall, the UPSC Preliminary examination of this year presented a slightly lengthy paper, but people who have done broad reading they would be definitely at an advantage. Dr. Khan’s tip to solve such question papers is the detailed study of issues. He also suggests students who have appeared in this year’s PT examination not to indulge too much in counting, matching and discussing the questions. Instead, they should get back to action and start preparing for the Mains.