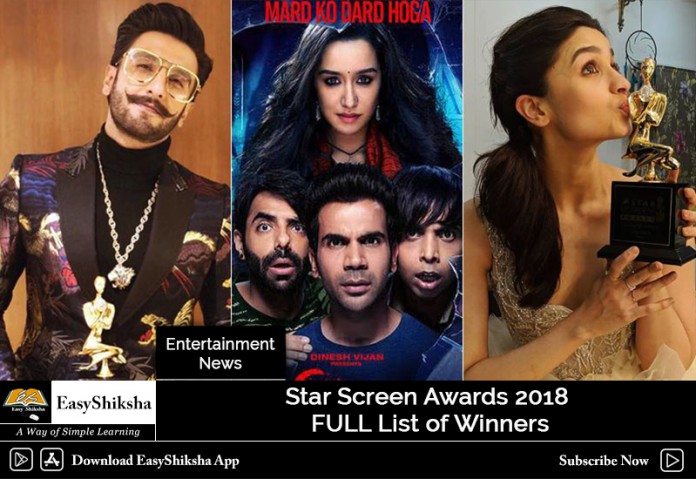 Katrina Kaif, who is now looking forward to Zero’s launch starring Anushka Sharma and Shah Rukh Khan, was awarded the Best Real Star on Social Networking award. After receptions and star weddings, it’s time for award functions. The Star Screen awards 2018, which was held in Mumbai on Sunday, saw a host of Bollywood A-listers in attendance. Salman Khan, Rekha amongst others, Alia Bhatt, Ranveer Singh, Rajkummar Rao, Vicky Kaushal, Ayushmann Khurrana, Nushrat Bharucha, Jacqueline Fernandez turned up to its purpose. The Best Director award has been won by Sriram Raghavan because of his hit movie Andhadhun starring Ayushmann, Tabu, and Radhika Apte while the Best Film award went to Taapsee Pannu’s and Rishi Kapoor Mulk.

For portraying Delhi Sultan Alauddin Khilji of the biggest hit Padmaavat of 2018 the Best Actor award went. Rajkumar also won the award for her performance. Alia was given the Best Actor for her operation in the Raazi of Meghna Gulzar.

Best Debut (Male): Ishaan Khatter for Beyond the Clouds