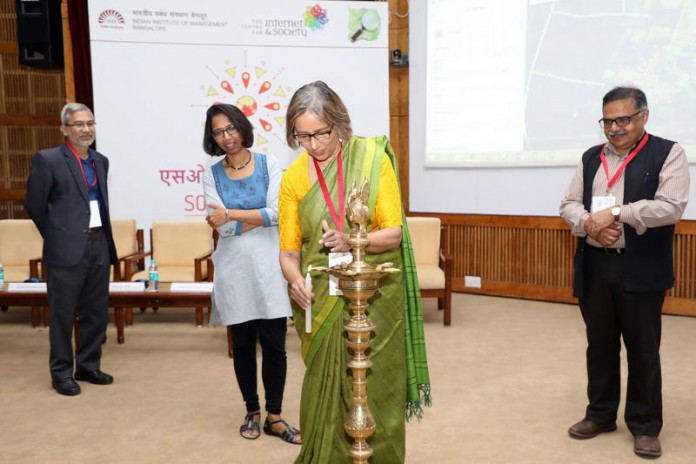 19 November, 2018: State of the Map Asia 2018, an annual conference that brings together the OpenStreetMap (OSM) communities across Asia was hosted on 17-18 November at Indian Institute of Management, Bangalore.

It was organized by the Centre for Public Policy (CPP) and the Centre for Software and IT Management (CSITM) of IIM Bangalore, OpenStreetMap India, and Centre for Internet and Society.  The two-day event featured presentations, panel discussions, and workshops about mobilizing, sustaining, and growing more inclusive open mapping communities. It was attended by more than 300 participants from 12 countries.

The event began on an innovative note to promote the spirit of mapping. In addition to the traditional lamp-lighting ceremony, Proj. Abhoy K. Ojha, Dean, Academic Programmes, IIMB, contributed to the OSM project by adding the name of the building where the conference was hosted. Prof. Rahul De, Chair, Centre for  Software and IT Management, IIMB, welcomed the participants and spoke about the parallels between the open source movement at IIMB and the core values of the OSM movement. Prof. Hema Swaminathan, Chair, Centre for Public Policy at IIMB, talked about using more geospatial data in aiding public policy conversations.

Presentations made at the event showed how lapses in service delivery were identified or used to drive conversations using participatory maps. These maps were used in urban and rural areas at a neighbourhood, city, state and national scale. For instance, Anindita Nayak explored safety in public spaces in Bangalore by mapping lack of streetlights; Ankit Bhargava presented how OSM maps led to a participatory design process to create a very detailed, informative public map of Cubbon Park. Jaisen Nedumpala, a panchayat official in Koorachundu (Kerala), used open source tools and community participation to fix land record boundaries for the village. Manoj Karingamadathil shared that 2,200 mapping volunteers from around the world added 400,000 data points to the OSM map of Kerala, aiding the state government’s ability to provide speedy relief. Harry Mahardhika Machmud shared experiences of citizen-led surveys in Indonesian cities to help the government prepare disaster response maps.

Dr. Anita Patil-Deshmukh, the event’s first keynote speaker, contended that official maps did not account for the majority of the under-served communities that inhabited Mumbai and its effects on provision of public services. Through community-based mapping, they felt empowered to engage better with stakeholders for effective provision of services. Other speakers echoed Dr. Patil-Deshmukh’s call to create more capacity within grassroots communities. For instance, Airin Akter asserted the importance of maps in local languages for effective dissemination of public information in Bangladesh. Pradip Khatiwada spoke about the creating innovative training and internship programs, digital activism, and demonstrating successful use-cases in Nepal. Siddharth Hande, the closing keynote speaker, affirmed the need to empower communities through data-driven narratives in his engagement with the cyclical waste management economies.

The conference also hosted panels discussing ways to sustain and grow OSM communities across the continent as well as locating the successful business case to strengthen the role of OSM in logistics, infrastructure and resource management as well as service delivery.

For a full list of schedules, please visit: https://stateofthemap.asia/program

OpenStreetMap (OSM) is a collaborative project to create a free editable map of the world. The creation and growth of OSM has been motivated by the advent of inexpensive portable satellite navigation devices. Created by Steve Coast in the UK in 2004. Since then, it has grown to over 5 million registered users who can collect data using manual survey, GPS devices, aerial photography, and other free sources.

State of the Map (SOTM) Asia is the annual conference of OpenStreetMap communities since 2015. The first conference was organized in Jakarta, Indonesia (2015), followed by Manila, Philippines (2016) and Kathmandu, Nepal (2017).

Indian Institute of Management Bangalore (IIMB) was established in 1973 and is a leading graduate school of management in Asia. Under the IIM Act of 2017, IIMB is an Institute of National Importance. IIMB has around 110 full-time faculty members, more than 1200 students across various degree/diploma granting programs and nearly 5000 annual Executive Education participants.

IIMB’s vision is to be a global, renowned academic institution fostering excellence in management, innovation and entrepreneurship for business, government and society.

Located in India’s high technology capital, IIMB is in close proximity to some of the leading corporate houses in the country, ranging from information technology to consumer product companies, giving the institute an added advantage of integrating classroom knowledge with practical experience.