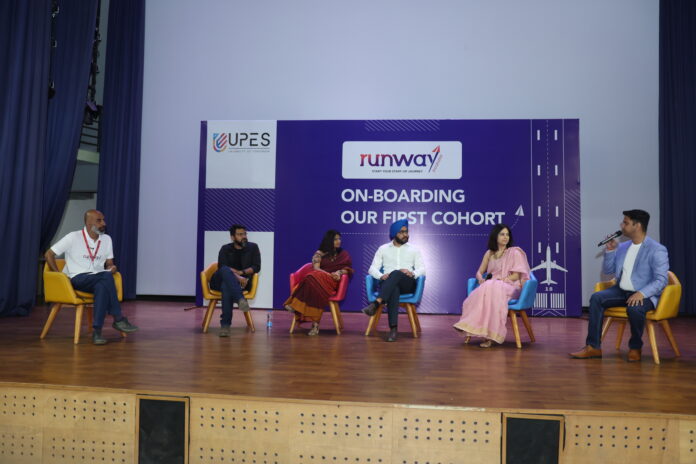 In December last year, UPES, a multidisciplinary university in Dehradun launched an ambitious incubation program ‘Runway’, to work with start-ups within and outside the university to help them transition into scalable businesses. Completing a quarter, Runway initiated its first pre-incubation cohort in a two-day event hosted at UPES with selected 82 start-up ideas from over 400 applications.

In the first round of pitching, 8 start-ups out of the selected 82 raised more than INR 70 lacs from a group of investors that included Rahul Narvekar, CEO- The India Network, Dr Ram Sharma, Pro VC at UPES, Mudit Verma, UPES Alumni and Mr Gagan Ghai, Angel Investor- Director Crest Innovation, a first instance in UPES and Uttarakhand where funds were raised on the spot.

The eight start-ups that raised funding were-

Speaking at the launch of the pre-incubation program, Rahul Nainwal, CEO of Runway said, “At UPES we believe in promoting research, innovation, and entrepreneurship whether it is within or outside campus. With this belief we had launched the Runway program and the first fundraising and incubation event has given it a positive and successful start. The objective now is to nurture and mentor the selected start-up ideas and encourage more students, alumni, faculty and staff to pursue their start-up dream and get incubated at Runway”.

The selected 82 Runway start-up ideas will now go through an eight-week, carefully curated programme where they will learn how to build a business, how to incorporate companies and how to make a pitch to investors by interacting with seasoned entrepreneurs, CAs and start-up mentors.  At the end of the pre-incubation programme, the start-ups will get an opportunity to raise grants and get formally incubated at Runway or pitch to a group of investors and raise funds.

‘Runway’ is established under UPES Council for Innovation and Entrepreneurship (UCIE), which has been recognized by the government of Uttarakhand as a business incubator and the state nodal agency to encourage entrepreneurship and help incubate start-ups in the state.  The objective of Runway is to help these start-ups refine their ideas through a process involving Incubation, Mentoring, Pitching, Nurturing and Networking.