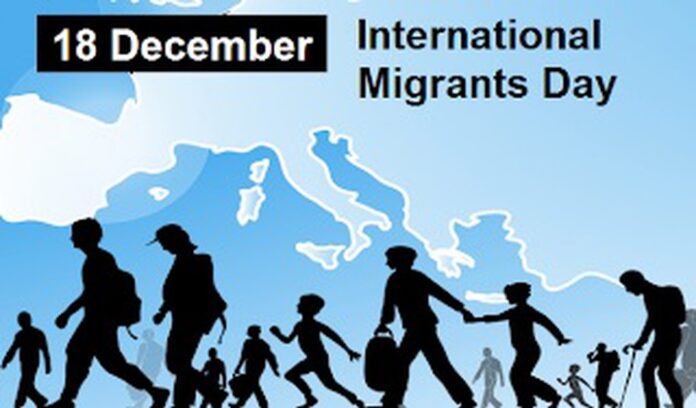 On 18 December 1990, National Assembly adopted a resolution on the International Convention for the Protection of the Rights of Immigrant Workers and their Family Members. and mark this day as International Migrants Day

Each year on December 18, the United Nations, through the UN agency International Organization for Migration (IOM), uses International Migrants Day to highlight the contributions made by some 272 million migrants, including more than 41 million people internally displaced, and the challenges they face

This international event, supported by events organized by nearly 500 IOM national offices and underground offices as well as government, international and local partners examining a variety of migration themes, Social Cohesion, Dignity, Exploitation, Solidarity to promote migrant leadership on the principle of migration and order helps immigrants and the community.

Reason why this day is celebrated

In 1997, the Philippines and other Asian migrant organizations began celebrating and celebrating December 18 as the International Day of Unity. This date was chosen because it was 18 December 1990 when the UN adopted the Convention on the Protection of the Rights of All Migrant Workers and their Family Members.

To build this program, on December 18 with the support of Migrant Rights International and the Steering Committee of the Global Campaign for Ratification of the International Convention on Migrants’ Rights and many other organizations – began in late 1999 to campaign online for the official appointment of UN for International Migrant’s Day, which was last announced on 4 December 2000.

The United Nations Declaration of the Day of Immigration is an important step, providing a forum for all those concerned with the protection of immigrants. The UN has called on all UN member states, government agencies and non-governmental organizations to celebrate the day by disseminating information on human rights and fundamental freedoms for immigrants, sharing their experiences, and taking steps to ensure the protection of immigrants.

International Migrants Day is seen as an opportunity to recognize the contributions made by millions of immigrants to the economies of their host countries and home countries that promote respect for their basic human rights.

Making the voices of immigrants louder is a common thread in all Immigrant Day events. Since 2016, International Migrants Day has also served as part of the IOM’s final gala event for the three-week Global Migration Film Festival (GMFF) which in 2019 unveiled more than 620 screenings of migrant movies and interviews panel on the IMD2019 Community Unity theme in 107 countries around the world.

According to a report by the Global Commission on International Migration in 2005, the number of foreign nationals increased from 75 million to 200 million over the past 30 years and migrants could be found in all parts of the world. The report also found that migration could accelerate due to the increasing diversity of development, census and democracy that existed between the different regions of the world. In addition, migration is driven by the overwhelming economic, social and political forces that governments need to recognize as real.

On December 4, 2000, the UN General Assembly, looking at the growing number of migrants in the world, declared December 18 as the world’s largest immigrant. On that day, ten years earlier, the convention adopted the International Convention on the Protection of the Rights of All Migrant Workers and Members of their Families. Previous celebrations of the day can be traced back to 1997 when some Asian organizations that came included December 18 as a day to honor the rights, protection and dignity of immigrants.