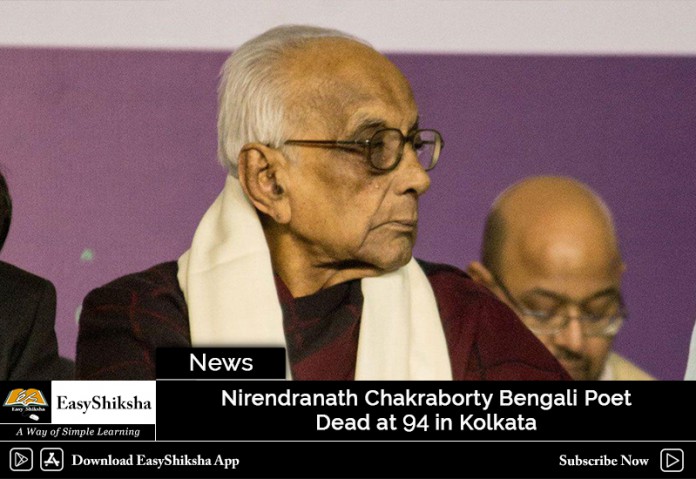 Eminent Bengali poet and Sahitya Akademi award winner Nirendranath Chakraborty passed away at a city hospital on Tuesday after suffering a cardiac arrest. Chakraborty was 94.

He was admitted to the private hospital on Monday due to age-related ailments including acute breathing problem and suffered the cardiac arrest at midnight, the family said.

Chakraborty is survived by his two daughters. His wife had died in January this year.

Born in 1924 at Faridpur in undivided Bengal, Chakraborty was a dominant figure in the modern Bengali literary field.

Chakraborty published his first book of poems, Nil Nirjone, in 1954, when he was 30 years old. In 1974, he won the Sahitya Akademi award for his poem Ulanga Raja, which was a satire on society. Some of his other famous poems include Amalkanti Roddur Hote Cheyechhilo, Kolkatar Jishu, and Pahari Bichhe.

Born in 1924 at Faridpur in undivided Bengal, Chakraborty was a prominent face in the modern Bengali literary field. His first book of poems, Nil Nirjone, was published in 1954 when he was 30 years old. ‘Amalkanti Roddur Hote Cheyechhilo’ (Ammalkanto wanted to be the sunshine), ‘Kolkatar Jishu’ (Christ of Kolkata) and ‘Pahari Bichhe’ (Mountain scorpion) are among his other noted poems.

The poet penned more than 47 books, many for children, apart from 12 novels and numerous essays. He was associated with leading Bengali magazine ‘Desh’ and ‘Anandamela’ for children, of which he had been the editor for years, and some other magazines. In November, he had penned a poem for a magazine, which will be published in its upcoming Kolkata Book Fair issue. He was also a recipient of ‘Ananda Purashkar’ and was the president of Paschim Banga Bangla Akademi.