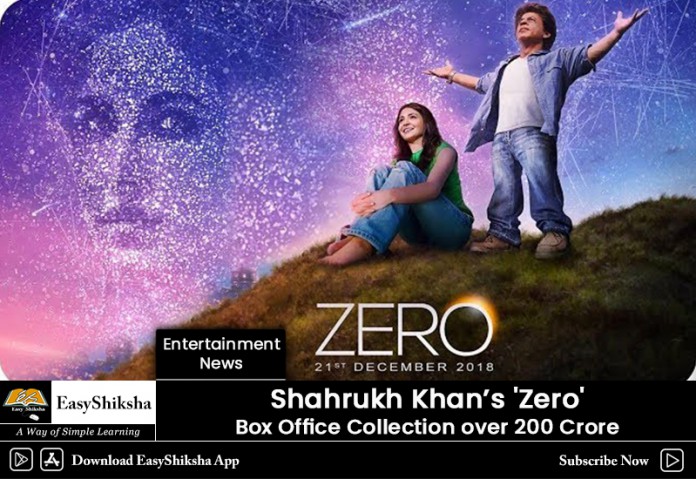 ‘Zero’ Box Office Collection Day 13: Shahrukh Khan’s ‘Zero’ box office continues to fight. Shahrukh Khan, Anushka Sharma and Katrina Kaif, the movie ‘Zero’ have been released for 13 days, but the movie has thus far received Rs 100 crore. Cannot cross the amount of Based on Box Office India.com, the film earned Rs 1.25 crore on the second Tuesday and thus, the movie has received Rs 89.25 crore within 12 days. Has got it. Statistics on the 13th day are yet to come. But Shah Rukh Khan’s ‘Zero’ has come to the news that the satellite and audio rights of the movie are worth Rs 130 crore. Were sold in this way, prior to the launch of the film, Rs 100 crore Had crossed the figure. This is also a good thing for Shahrukh Khan’s ‘Zero’ due to Anand L.

Shahrukh Khan had attained such a huge amount even before the launch of ‘Zero’. Shahrukh Khan is seen as an authority in film marketing anyhow. The Trade Expert was anticipating that if the magic of’Zero’ went to the box office then the film could be of enormous advantage. However, Shahrukh Khan’s good acting, but due to weak story and direction, the movie box office (Box Office) could not get lost and angry. ‘Zero’ will be just two weeks but the film is worth Rs 100 crore Is far from the characters.

Zero Box Office Collection Vs Others

Shah Ruk’s personality in Zero, a stunt called Bauua Singh, has been praised by moviegoers, the film has not been performing as well as the manufacturers have anticipated. Shah Rukh has made a comeback in Zero after nearly one and a half year of a gap. Before Zero, he had been seen in Jab Harry Met Sejal, that was released in 2017.

Zero’s unsatisfactory earnings may be the result of the difficult competition it faces from other films like Hollywood’s Spider-Man and Aquaman and Rajinikanth-Akshay Kumar’s 2.0.

Zero is a love story that revolves around a vertically challenged person, Bauua Singh, played by Shah Rukh Khan. Bauua is caught in a love triangle with Aafia, performed by Anushka Sharma, and Babita Kumari, played by Katrina Kaif.