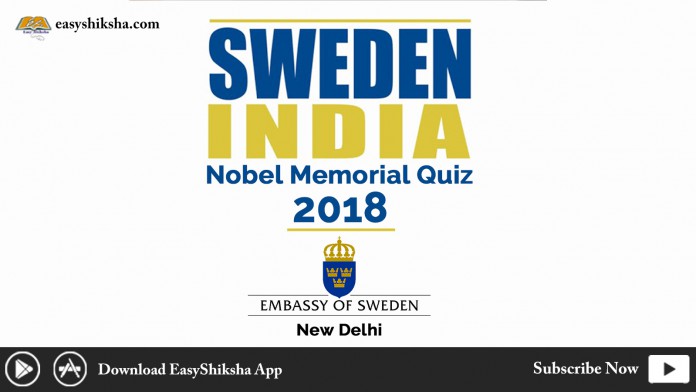 It is time for students to put their thinking caps on as the annual Sweden-India Nobel Memorial Quiz 2018 commences in Mumbai on 29th September 2018 and will be held in across seven cities. Launched in 2008, this much awaited annual quiz has grown exponentially over the years and is a unique medium to test student’s knowledge on the Nobel Prize, Nobel Laureates and their achievements along with Sweden, its people, culture, Swedish innovations and inventions. Organized by the Embassy of Sweden in collaboration with leading Swedish companies in India and other partners as well as the Consulate General of Sweden

Bottom of Form in Mumbai, it forms part of the Sweden India Nobel Memorial programme.

The quiz is open to all Indian students currently enrolled at a college/university in India. Students are required to form teams of 3 members, all from the same institution. Each team must comprise at least one male and one female student, unless the institution is gender-restricted. The winning team from each city will qualify for the grand finale to be held Delhi on 1st November 2018.

The prize for National quiz champions will be an all-expenses paid trip to Sweden. The awardees will get to visit the headquarters of the partnering companies, Swedish universities and the Nobel Museum. All participants will be provided the certificates. Besides, there will exciting prizes for audience as well.

This year the Sweden India Nobel Memorial Quiz puts an extra emphasis on increasing the female participation. As an attempt to bridge the gap, the quiz rules for participation has been revised to encourage more equal participation.

Ambassador Klas Molin said, “We are thrilled to once again reach out to young talent across India through our flagship event, ‘Sweden India Nobel Memorial Quiz’. We are making an extra push to encourage even more female participation.”

The quiz will be hosted by quiz masters Seema Chari and Kunal Savarkar of Xpressminds- .

Instituted in the memory of Swedish innovator, entrepreneur and philanthropist Alfred Nobel, it celebrates the contribution of both Swedish and Indian Nobel Laureates.

With the innovation as its theme, the celebrations spread over a couple of months, will act as a vehicle to showcase the prowess of Swedish companies in India.

The Sweden India Nobel Memorial programme 2018 comprises a bouquet of events ranging from seminars and panel discussions to competitions for student and cultural -events.