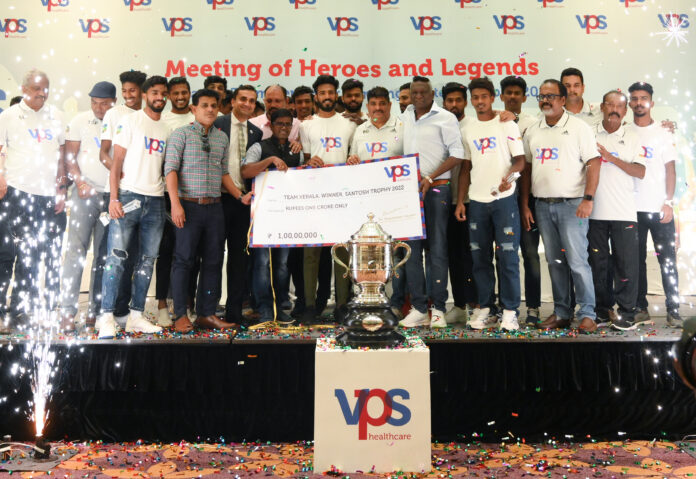 The Santosh Trophy-winning team came together with former Kerala captains
and players in a unique event organized by Dr. Shamsheer Vayalil

A cheque of Rs. 1 crore from Dr. Shamsheer was presented to the Santosh
Trophy-winning team

Kochi: It was an incredible moment when three generations of football players
came together during a felicitation ceremony for the Kerala football team
organized by Dr. Shamsheer Vayalil, Chairman and Managing Director, VPS
Healthcare. The football legends united under one roof for the presentation of Rs.1
crore announced by the NRI entrepreneur to the Santosh Trophy-winning team.

Kerala captain Jijo Joseph said, “We had intense training sessions. Thanks to our
head coach and other coaching staff for their continuous support. I feel that a
selfless interest in sports guides decisions like these, which will lead to the growth
of sports in the country,” he said, thanking Dr. Shamsheer for the surprise
announcement before the final.

It was a treat to watch Mr. Vijayan greet the winning team. The legend, who
played for Kerala and West Bengal in Santosh Trophy and captained the Indian
team, said, “We are happy that Dr. Shamsheer has honoured us veteran players and
coaches. I don’t think this has ever happened before. It makes me feel proud.” An
emotional Mr. Vijayan also requested the entrepreneur to start an academy at the
grassroots level in Kerala.

A Day to Remember
Mrs. Sathyan remembered the legendary captain and his struggles throughout his
career.
“I am happy to be a part of this special gathering of the football family. I thank Dr.
Shamsheer for organizing this event and inviting the former players too. I am sure
such initiatives will be an impetus for the new generation to walk the path,” she
said, adding that extending financial aid to players during their playing career
would help them achieve their dreams.

Rs 10 Lakh for Goal Scorers
The players who scored goals for Kerala throughout the tournament were also
honoured with a cash prize of Rs. 10 lakh.

According to Dr. Shamsheer, acknowledging the contributions of the sportspersons
would encourage them to achieve more. “It is the collective responsibility of
society to recognize their hard work. Victories are not made in a day. For all seven
title-winning performances, the players put in a lot of effort. I believe this get-
together will document those efforts and lay a strong foundation for the future of
football in the state,” he said.


“I would like to thank Dr. Shamsheer for giving me an opportunity to share the
stage with football legends. This prize money is a motivation, and I am sure more
people will come into sports with this kind of support,” said team head coach Bino
George about the cash reward.

The organization also honoured the former coaches and captains with mementoes and special gifts.