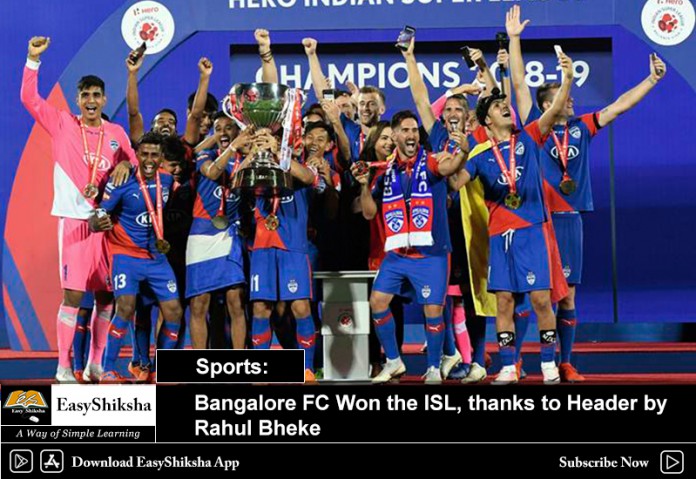 Bangalore FC exorcised the demons of the last year’s finale, after securing a narrow 1-0 victory over 10-man FC Goa in the finals of the Indian Super League at the Mumbai Football Arena on Sunday. Rahul Bheke’s header deep into extra time was enough as Bengaluru scripted history, becoming just the third side to win the trophy.

The 28-year-old guided Dimas Delgado’s cross in the 116th minute into the top corner to help the Blues win their sixth title, adding to their two I-Leagues, two Federation Cups and a Super Cup crown. With this, BFC have also sealed their spot in the next edition of the AFC Cup. While there was no surprise in the starting line-up for Bangalore FC, Sergio Lobera started with Ahmed Jahouh, who was substituted against Mumbai City FC in the second leg of the semi-final, in the midfield.

In one corner of a predominantly orange crowd, a burst of blue exploded. The small travelling contingent from Bengaluru, outnumbered 6-to-1 by their Goan counterparts, roared a shock of noise in a stadium that had fallen eerily silent. For much of the night, the drama and entertainment was restricted to a raucous crowd in Mumbai.

Goa too had their early chance, fourteen minutes in, but their talisman Ferran Corominas fluffed the shot after a fabulous switch ball from Jahouh released Jakichand Singh, who was able to find the striker. The game got heated up 10 minutes away from the close of the first half, with Juan Fernandes and Mourtada Fall producing forceful challenges, but only the latter was penalized by the referee with a yellow card.

The half came to a tame end as Mandar Rao Desai, the captain of the Gaurs, had to be taken off with a hamstring injury. Once he went down the second time, Lobera brought on 21-year-old Saviour Gama to play on the left.

Goa did have a much better say in the second half, dominating possession and producing a couple of clear chances early on.