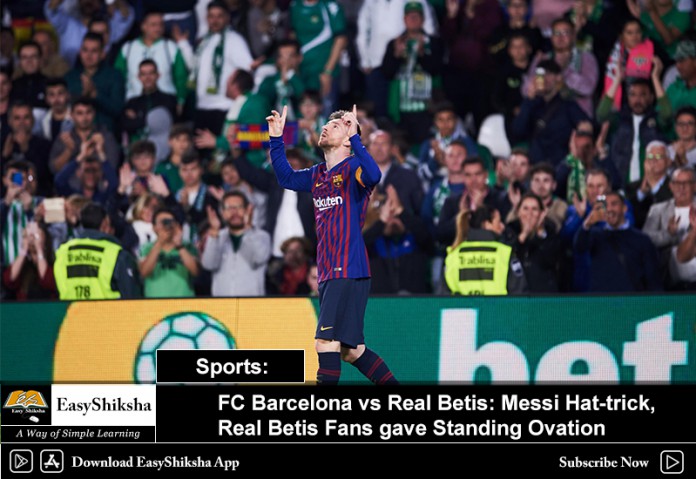 This is 51st hat-trick of Barcelona star Lionel Messi, who got standing ovation from Real Betis Fans after another God like skills that they all witnessed in today’s match. FC Barcelona won the match with 4-1. Used to receiving adulation at the Nou Camp, Messi got a rapturous reception from rival supporters for a majestic hat-trick, his 51st, in Barca’s 4-1 win. Messi scored the first with an unstoppable free kick then combined with Luis Suarez to carve Betis open and score a second goal right before halftime.

With Barca’s nearest challengers Atletico Madrid falling to a 2-0 defeat at Athletic FC Barcelona the previous day, Messi got Barca off to an ideal start by drilling a free kick into the top corner of the net in the 18th minute. Uruguay forward Suarez had missed several clear chances to score but he finally got his reward for a lively performance with a goal in the 63rd minute, dancing past four Betis players on a dazzling run which began in his own half.

There were worries for Barca at the end of the game, however. Suarez, clearly in pain, had to receive treatment on the sidelines and Barca later confirmed he had sprained his ankle and would undergo tests on Monday to determine how long he would be out.