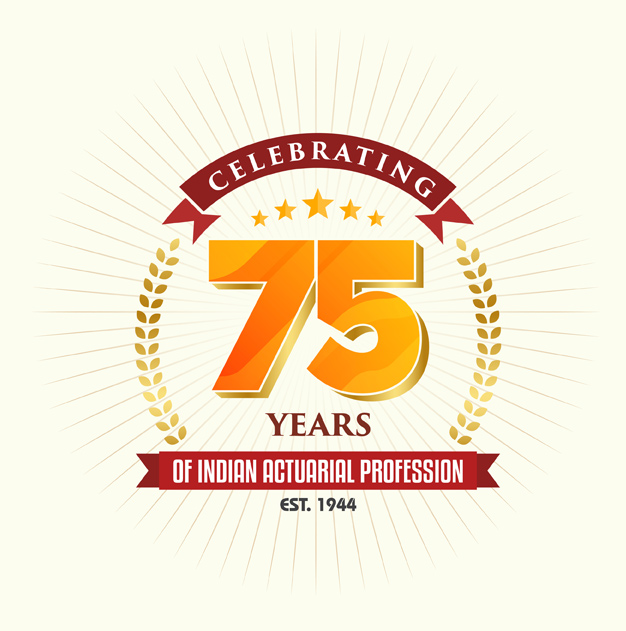 New Delhi, February 17, 2020: Institute of Actuaries of India (IAI) celebrated the platinum jubilee of Indian Actuarial Profession. The celebration was attended by the veteran actuaries, chief actuaries, chief executives, chief financial officers of various insurance companies. A large number of student members of IAI were present during the event.

IAI released a Coffee Table Book covering the history of actuarial profession in India. The book was released at the hands of Andrew Rallis, President of Society of Actuaries.

The Coffee Table Book captures the journey of actuarial profession in India that started with the erstwhile Actuarial Society of India (ASI) which was established in September 1944 with the objective of fostering growth of the Actuarial profession in the country. L.S. Vaidyanathan was the first President of the ASI, who laid the early foundations of the profession.  The ASI played a vital role in providing inputs to the government to help formulate policies regarding insurance, pension funds etc. The book also encapsulates key milestones that brought paradigm shift in the actuarial profession like introduction of IRDAI Act, the Insurance Act and transition from ASI to Institute of Actuaries of India when Actuaries Act, 2006 came into existence. Key initiatives taken by IAI for betterment of the profession is also highlighted in the book.

The importance of Actuaries has been proved time and again in the varied sectors of Insurance and Financial Risk Management.

“This is a proud moment for the Actuarial profession. I am grateful to all our veteran actuaries who have immensely contributed for the profession to bring it to the current stage. We need to enhance the awareness about the value that actuaries add to the lives of people and serve the interest of the public at large.” said, Sunil Sharma, President, Institute of Actuaries of India.

“The work of actuaries is vital to the success of the insurance industry which is essential for an orderly society. I congratulate the actuarial fraternity in India on its 75th year anniversary and I am proud and humbled to contribute in some small way to its continued success. ” said, Andrew Rallis, President, Society of Actuaries.

About Institute of Actuaries of India (IAI)

IAI is a statutory body established under The Actuaries Act 2006 (35 of 2006) for regulation of profession of Actuaries in India. The provisions of the said Act have come into force from 10thday of November 2006, in terms of the notification dated 8th November 2006, issued by the Government of India in the Ministry of Finance, Department of Economic Affairs. As a consequence of this, the erstwhile Actuarial Society of India was dissolved and all the Assets and Liabilities of the Actuarial Society of India were transferred to, and vested in, the Institute of Actuaries of India constituted under Section 3 of the Actuaries Act, 2006. The erstwhile Actuarial Society of India (ASI) was established in September 1944. Since 1979 the ASI has been a Full Member of International Actuarial Association (an umbrella organizations to all actuarial bodies across the world) and is actively involved in its affairs. In 1982, the ASI was registered under Registration of Literary, Scientific and Charitable Societies Act XXI of 1860 and also under Bombay Public Charitable Trust Act, 1950. In 1989, the ASI started examinations up to Associate level, and in 1991, started conducting Fellowship level examination leading to professional qualification of an actuary, till then the accreditation was based on Institute of Actuaries, London examinations (now Institute and Faculty of Actuaries).