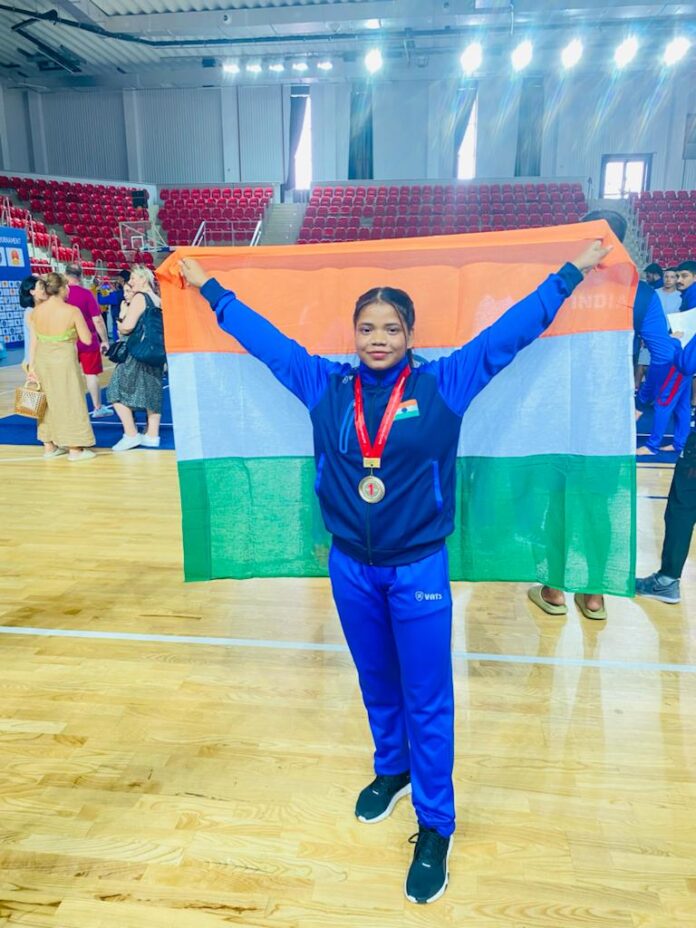 Gurugram: M3M Foundation, the philanthropic arm of the M3M Group, today announced that its Lakshya Scholar Priyanka Kewat, who participated in the International Wushu Tournament at Batumi, Georgia, from August 2 to August 7, 2022, won gold in the Under 18, Juniors category for the 48 kg weight category.

A daughter from an economically-disadvantaged family of Madhila village in Sidhi district of Madhya Pradesh, Priyanka made India proud by winning a gold medal in the international Wushu competition. She is the daughter of Sonia Kewat and Shivdayal Kewat, who works as a cashier in a nursing home in the Sidhi district. Wushu is a sport similar to martial arts.

Expressing her happiness on Priyanka’s victory, the Sports and Youth Welfare Minister of Madhya Pradesh Government, Smt. Yashodhara Raje Scindia, through her tweet, congratulated and wished the athlete the best for the future, saying, “The courage to do something, and passion for succeeding, make all difficulties insignificant. Priyanka Kewat, daughter of Sidhi district, has proved this once again by winning gold in the Wushu championship in Georgia.”

Priyanka’s parents are thrilled with her achievement. The parents were jubilant over their daughter’s achievement, saying that they had no idea her name would be illuminated even abroad. They had even begun planning Priyanka’s wedding, but her passion took her in a different direction.

Excited by this victory, Priyanka said, “It was my first international competition, and I felt very proud to see my country’s flag flying high. I am grateful to my coaches, parents and the M3M Foundation for providing me with all the support and guidance I need to live this golden moment. The gold medal will motivate me to work harder. Now I’m focusing completely on competing in the forthcoming championship.”

M3M Foundation Gurugram, seeing Priyanka’s dedication and hard work, awarded her a scholarship under its Lakshya programme to assist in her training. The Lakshya programme provides sports training facilities and scholarships to emerging players in the country who are financially challenged.

Expressing her enthusiasm, Dr. Payal Kanodia, Trustee of M3M Foundation, said, “Priyanka’s victory has boosted the morale of the girls of the country who are unable to progress due to poverty and deprivation. M3M Foundation, through its Lakshya program, is fulfilling its commitment to take forward such emerging talent of the country and Priyanka’s victory is an example of that. I congratulate Priyanka on her gold medal in Wushu and extend my best wishes on behalf of the M3M Foundation for many more such achievements in the future.”

Priyanka, who considers Mary Kom as her role model, dreams of raising the flag of her country high by performing well in the Asian Games to be held in 2023 and the World Championship to be held this year.

The M3M Foundation’s Lakshya-Udaan Hoslo Ki program addresses the roadblocks to making a career in sports and arts and acts as a support pillar for talented youngsters.