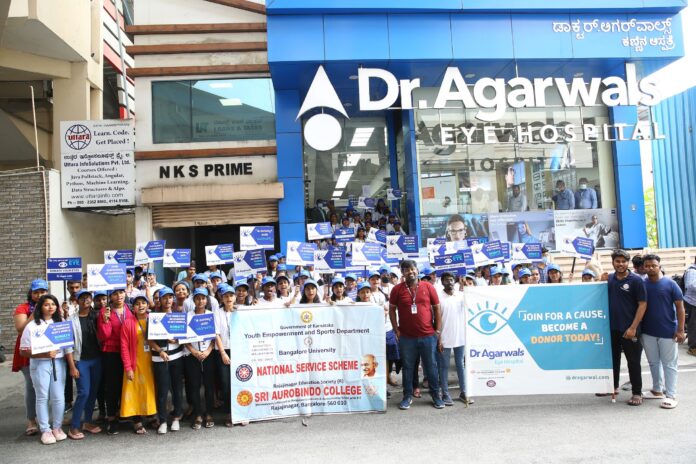 BENGALURU / September 6, 2022: Dr. Agarwal’s Eye Hospital organized a Walkathon in Bengaluru to raise awareness about eye donation as part of the ongoing National Eye Donation fortnight. More than 100 students from Sri Aurobindo College, doctors’ and members of the public walked from Rajajinagar Metro Station to the college, carrying placards, encouraging people to take pledge to donate their eyes.

Said Dr. Devaraj M, Medical Director and Senior Consultant, Dr. Agarwals Eye Hospital, Bengaluru: “About 9.5 lakh individuals in Karnataka suffer from blindness, and more than one lakh people are on the waiting list to receive a corneal transplant. Lack of awareness about eye donation is the main reason for low collection of donor corneas in the country. This week-long campaign by Dr. Agarwals Eye Hospital is an attempt to make people understand the importance of eye donation. We are appealing to each Indian to come forward to donate their eyes so that the curse of corneal blindness can be eradicated, and many more people can get the gift of eyesight.”

Said Kuldeep Kumar R Jain (IPS): “I am delighted to be a part of this noble initiative to create awareness about eye donation in the state. Today, I also pledge to donate my eyes to give a chance to someone visually impaired to experience the delights of our beautiful world.”

Added L. Nagesh (KSPS): “Eye donation should be made popular in every state in India, and everybody should come forward to pledge their eyes. Renowned Kannada actor Puneeth Rajkumar is a good example for all of us. His corneas were transplanted in four corneal blind patients, giving them the ability to see. He followed the footsteps of his father, Dr. Rajkumar and mother Parvathamma Rajkumar, in donating their eyes after their death.

Due to their impact, we saw many more people coming forward to pledge their eyes.”

Said Dr. Devaraj M: “Every citizen of India can be an eye donor, irrespective of age, caste, creed, sex, religion, or blood group. Even those suffering from refractive errors and wearing glasses or contact lenses can become eye donors. People who underwent cataract surgery and those who are suffering from systemic diseases such as diabetes, hypertension, heart or kidney disease can also donate their eyes.”

More than 15 million blind people live in India, out of which 3.5 million suffer from corneal blindness, with 40,000 new cases being added each year. Even though one eye donor can give sight to four corneal blind persons, there is a huge demand-supply gap. According to the National Blindness & Visual Impairment Survey 2019, corneal blindness is the major cause of blindness in patients aged less than 50 years, accounting for 37.5 % of the cases, and the second most important among those aged more than 50 years. Majority of cases of corneal blindness can be corrected through a corneal transplant.

Dr. Agarwal’s Eye Hospital a comprehensive eye hospital offering a one-stop solution for eye ailments; was started in the year 1957. Now the hospital is in its 61st year of offering quality services in eye care. It has 120+ hospitals across India. With a visible footprint in the states of Karnataka, Andhra Pradesh, Telangana, Kerala, Odisha, Maharashtra, Gujarat, Andaman, West Bengal, and Rajasthan. A tertiary eye care centre at Mauritius marks its first step towards establishing an international presence extended up to 13 branches covering the Indian Ocean region, African countries, and East Asia.