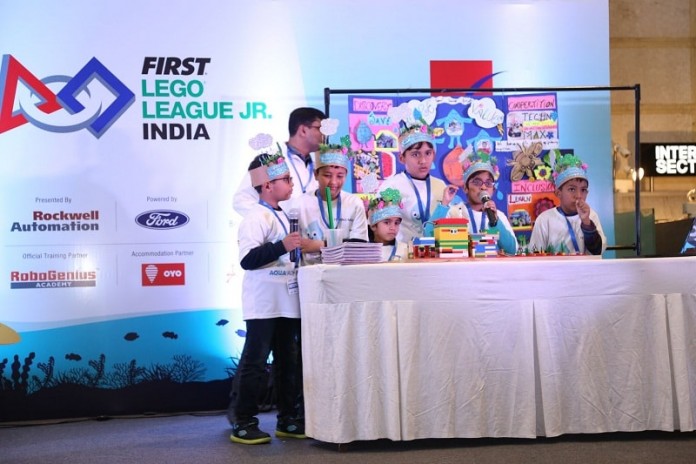 The theme for this year’s event is HYDRODYNAMICS. Students in a team of 2-10 members showcased their innovative solutions to several real-world human water cycle issues including water conservation and water treatment in the regional competitions. They also designed, built and programmed autonomous robots that are capable of completing a series of pre-defined water-related tasks on a tabletop play mat. Based on the assessment by an esteemed panel of judges from corporate organizations like Rockwell Automation India, FORD India, DXC Technology and academic institutions, 52 teams were shortlisted for the National Championship.

FIRST LEGO League is a unique STEM-based robotics competition catering to students of age group nine to sixteen years that immerses children in the real-world science and technology challenges through a fun-filled exploration journey. Students in a team of two to ten members research and design their own solution to a current real-world scientific question or problem. They also build and program autonomous robots that perform a series of missions while improvising their valuable 21st-century skills or life skills.

“FIRST LEGO League has conceptualized a unique program that enables the young generation to be competent for the future careers that may require radically different skill sets. It was heartening to witness overwhelming enthusiasm and participation from talented students in regional championships. The program has also received commendable involvement from our sponsors Rockwell Automation India, FORD India and Velammal Bodhi School. We look forward to a more fun-filled and challenging National Championship,” said Sudhanshu Sharma, CEO, and Director, India STEM Foundation.