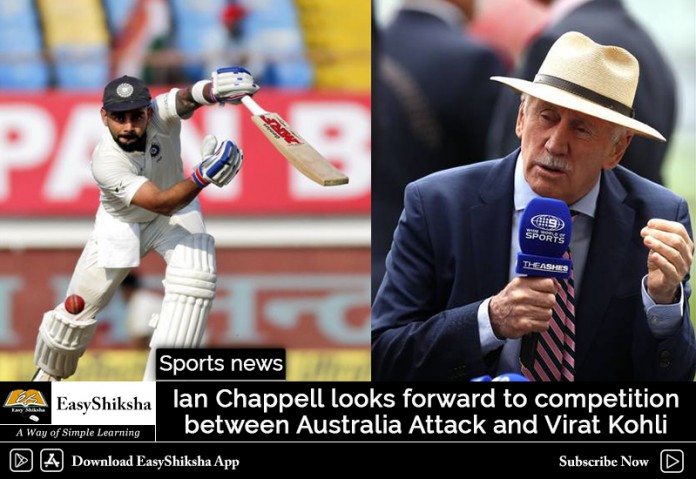 Indian captain Virat Kohli’s art is going to be put to test when he faces a powerful Australian attack and Ian Chappell is looking forward to that.

The Test rivalry, which has risen in height and intensity over the years, will be revived with the most recent assignment starting December 6 at Adelaide.

Australia would be with top batsmen Steve Smith and David Warner that were prohibited in the wake of this ball-tampering scandal that rocked the group earlier this year. “I will pick Australia, but do not ask me why I’m picking them. I believe the only reasonable reason I can give is that I was disappointed how India played in England and that I believed they should have won that series,” Chappell told ESPNCricinfo.

“Surely, on talent, they should beat this Australian side, but there could just be something lacking. The other issue is that the Australian attack.

Despite Australia’s struggles, if they’ve got everybody fit, they have got an excellent attack, and I’m particularly excited about the competition between Australia’s pace bowlers and Virat Kohli. That needs to be a fantastic contest. Last time he was here, Kohli played extremely well. The other thing I believe will have a big influence on the series: I was impressed by how the Indian fast bowlers bowled in England. They got the ball to move around. I am not convinced they will get exactly the exact same type of aid in Australian states, so I’m interested to see how they bowl, and I believe those two matters could tell a large story in the sequence.

On Australia, Chappell said the hosts could be surprising quite a few if they figure out how to place 350-plus totals on the board consistently.

“I believe you have to be a supreme optimist to consider Australia getting 350-400 runs regularly from the Test series. If they could get 350 sometimes, it is going to surprise a lot of people, me being one of them,” he quipped.