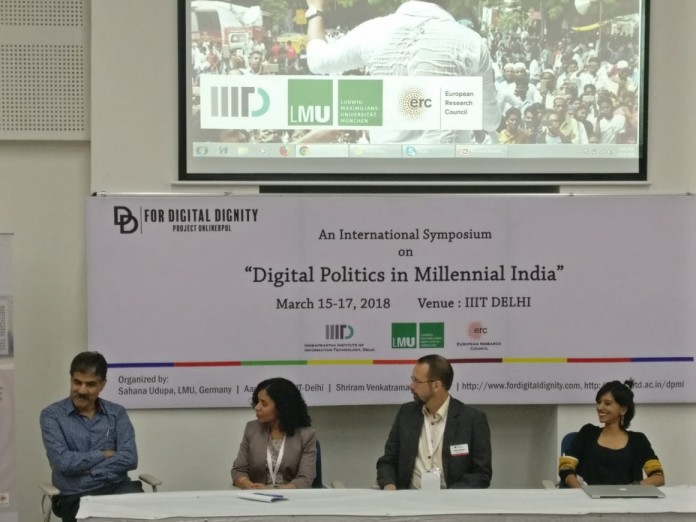 New Delhi, 15 March 2018: The national capital witnessed the grand launch of the International Symposium titled ‘Digital Politics in Millenial India’ at the New Academic Block of IIIT-Delhi. The symposium, which is scheduled from 15-17th March 2018 is jointly organized by IIIT-Delhi and LMU Germany. Through this symposium, the aim is to provide scholars, researchers and digital media activists with a platform to unpack the Internet media as information sources, rumor machines, effective affinity spaces, vehicles of propaganda, and objects of state policy as they are shaping the political present.

The Day 2 and Day 3 of the symposium will bring up these issues and much more, with pre-eminent personalities from around the world, including Arundhati, Sarah Zia, Avishek Ray, Krishanu Bhargav, Nida Hasan, Usha Raman, Martin Webb, Lion Koenig, Arvind Kumar Thakur,Gabriel Dattatreyan and many more.

Indraprastha Institute of Information Technology, Delhi (aka. IIIT-Delhi or IIIT-D) was created as a State University by an act of Delhi Government (The IIIT Delhi Act, 2007) empowering it to do research and development and grant degrees. IIIT-Delhi was officially established on 10th June 2008 as per this notification in the Delhi Gazette. First class (for BTech(CSE) students) was heldon 8th September 2008. In a relatively short time, it has earned a good reputation in India and abroad for being a center of quality education and research in IT. 2012 turned out to be a more remarkable year because, during the summer of this year, the institute started functioning from its permanent campus in Okhla. Smt. Sheila Dikshit, Chief Minister of Delhi, inaugurated the campus in October 2012.