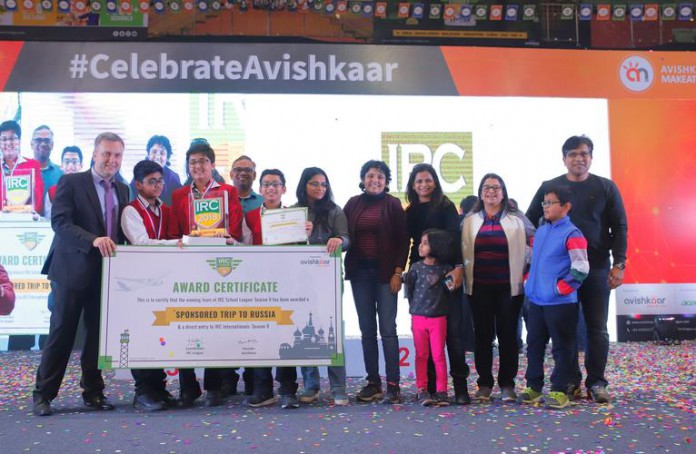 The team Scorpian – The Shri Ram School, Moulsari gets an all paid trip to Russia and entry in Makeathon International Robotics.

In this ninth season of the IRC League, over 1500+ participants contested in 17 Qualifiers of IRC School League: Season 9 across India – from Himachal Pradesh to Tamil Nadu. And more than 350 teams submitted their innovations as part of the Avishkaar Makeathon 2018. In each round of both competitions, participants showed their grit and determination to book their seats in the Nationals. The winning teams from both the competitions would receive a sponsored trip to Russia.

The Avishkaar has been hosting state-level inter school robotics competition from the past nine years and hosted it this year too. ‘Avishkaar’ even hosted ‘Avishkaar Makeathon’, a platform where ambitious people/students were at the forefront of the innovation and were inspired to explore their passion and showcase their dream idea. Along with getting a sneak-peek into the latest products by Avishkaar, the event also hosted exciting and interactive workshops including the verification of Bots for the IRC participants, arena rounds of IRC Nationals, Avishkaar Makeathon judgement, Avishkaar Aurora (The Light Show), cultural performances, prize distribution and felicitation, and many more.

The winning teams in each category were chosen based on their performance and accuracy. The team Shri Makerz- The Shri Ram School, Vasant Vihar was declared winner in the junior group. In Middle category, the team Scorpian- The Shri Ram School, Moulsari won the competition while in the senior category, Team Dr Kalam Science Club- Government Multipurpose Higher Secondary School, Bilaspur was declared as the winner. The top scoring team in each category was adjudged as the winner. The team Scorpian – The Shri Ram School, Moulsari was declared the overall winner in ‘Avishkaar Makeathon’. They made Spectacles with Sensor for the Blind People and secured first rank and will go to Russia. The score was calculated as per the Scoring Rubric by eminent panel of Judges by Avishkaar. The winners of the Nationals will get a DIRECT entry into the IRC League Internationals to be held in Russia in 2019. Not only this, they will also be getting a SPONSORED* trip to Russia for IRC League Internationals.

Mr. Tarun Bhalla, Founder and CEO, Avishkaar says, “Firstly, I would like to congratulate the winners and all the participants for being a part of this innovative competition. Both the days have been very exciting both for us and the participants. Creation, innovation and dedication is what we got to see in these two days. I’m equally excited for the winners’ trip to Russia. The winner and the participants here are going to be the face of our country and I believe they’ll work hard, perform harder and enjoy even more. Lastly, to conclude, winning or losing is not a big thing, but being in the race is what defines your courage.”

India’s biggest Science & Technology Competition is backed by Avishkaar. Its goal is to motivate students to develop a scientific bent of mind. Further, it encourages students to focus on practical ways to solve problems. Avishkaar has been conducting the IRC League – a league that aims to celebrate Science, Technology, Engineering and Mathematics (STEM) since 2009. The league is in its ninth year of challenging young and creative minds by giving them problems and challenges that not only stretch their imagination but also are burning issues. IRC League invites students, coaches and all stakeholders of the society to come together and build a better world for tomorrow using the tools of Science and Technology.

Avishkaar, previously known as Avishkaar Box, is an EdTech company building an ecosystem that creates engaging experiences that spark imagination and foster innovation. Avishkaar is in the business of manufacturing and selling of Robotics Kits. It develops and provides in-school Robotics program for children and installs Robotics & Science Labs for schools. The company has set up Robotics/Tinkering/Science Labs in close to 700 schools across the country. Avishkaar’s IRC League is the biggest Science and Technology competition in the whole of South Asia and has close to 50,000 students participating every year. Also, Avishkaar Makeathon is an annual event dedicated to science and technology which extends an opportunity to the ambitious people/students to be at the forefront of the innovation to explore their passions and showcase their dream ideas.