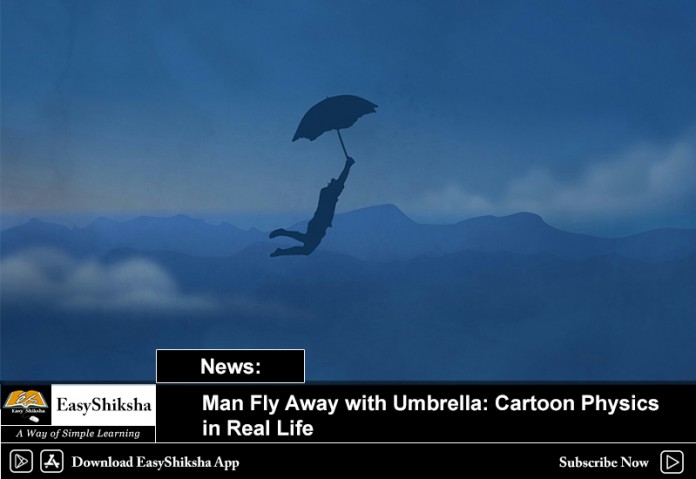 Marry Poppins style or cartoon physics, really do exist in our world. Sounds funny but yes this recent incident have made every one laugh and left amazed. Man Fly Away This incident took place in Turkey when a heavy wind started and try to fly an umbrella stand. People nearby tried to stop that from happening and then something weird happened.

Man Fly Away Strong winds in Turkey saw one man take flight, Mary Poppins style, as he tried to stop an umbrella stand flying away at a market in the town of Kadirli. Dubbed Turkey’s first astronaut (or “AstroNOT”), market worker Sadik Kocadalli tried to secure the bar umbrella with the help of three friends, but was lifted off the ground for several feet as he clung to the stand.

Speaking to reporters after the ordeal, Kocadallı explained that he was left unharmed.

I’m fine actually. After I realized the umbrella was going to keep going up, I jumped off. I think I rose 3 or 4 meters.

Sadly, another man was injured by the falling umbrella. Mehmet Ali Bıçakçı was knocked unconscious by the falling parasol, and also suffered broken ribs and a broken foot in the accident.

Online, the footage has been shared widely and has collected millions of views. Amazed reactions to it have been compiled into a Twitter Moment.

BLOWN AWAY: Surveillance footage captures moment strong winds lift man into the air as he tries to stop a patio umbrella from falling over in gusty conditions. https://t.co/zaR5d70Mqa pic.twitter.com/T3jGnXZfWe