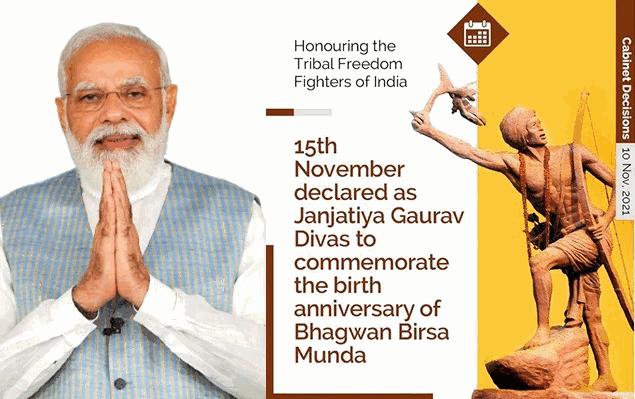 Prime Minister Shri Narendra Modi will arrive in Bhopal for a day’s stay at 12.30 pm on November 15, 2021. Shri Modi will attend Janjatiya Gaurav Diwas celebrations on the birth anniversary of Amar Shaheed Bhagwan Birsa Munda at Jamboree Maidan at 12.50 pm. Shri Modi will visit the exhibition of self-help groups and their products at the function. He will also visit the photo exhibition of martyrs and heroes of the freedom struggle from the tribal community and Madhya Pradesh. Prime Minister Shri Modi will launch the ‘Ration- Aapke Gram’ scheme by handing over the keys of the ration vehicle. The scheme provides PDS Ration to the Janjatiya community at the village level. A short film on the scheme ‘Ration- Aapke Gram’ will be screened.

The Prime Minister will launch the Madhya Pradesh Sickle Cell (Haemoglobinopathy) Mission by providing genetic counseling cards to two persons. A short film on the mission will be screened in the program. Also, Prime Minister Shri Modi will provide appointment letters to three out of 20 newly appointed Particularly Vulnerable Tribal Group (PVTG) teachers. A film will also be screened on the Janjatiya village Narsinghrunda of Jhabua district, the first village which has achieved the feat of 100 percent Covid vaccination in the state.